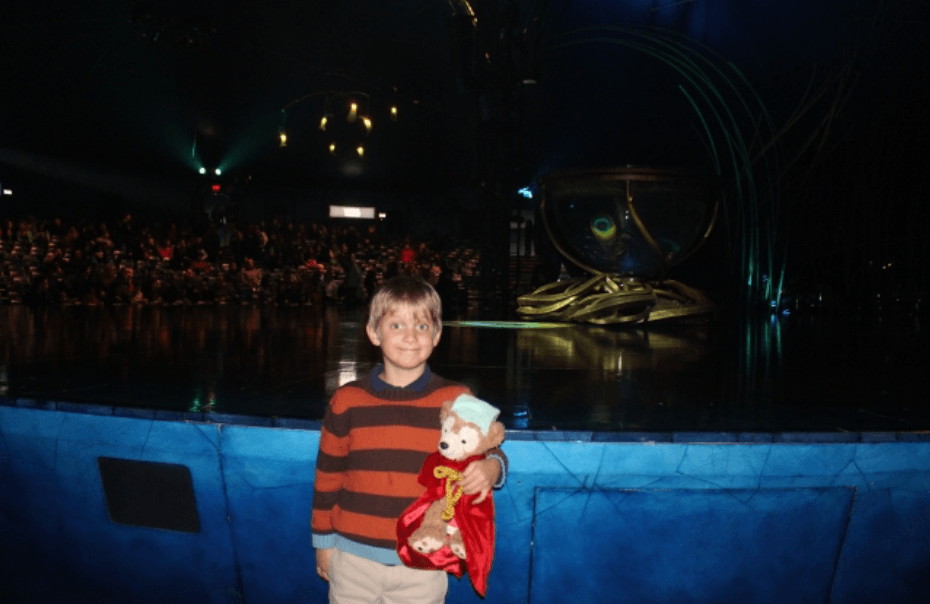 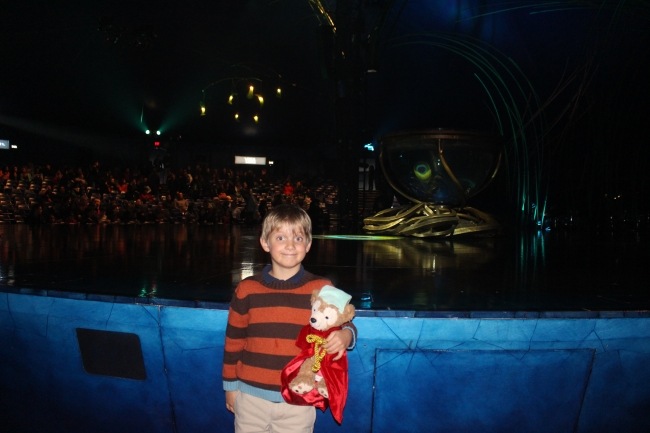 Duffy and Keaton ready to go back stage

Want to know what it’s really like to run away with the circus?

Cirque du Soleil is not just a resident show at the Bellagio in Vegas, it is a real traveling circus complete with real traveling circus performers. They arrive with everything they need, they even custom designed their own traveling kitchen. A month from now when they move on they will leave nothing but a memory.

Keaton follows a long and storied tradition of children enchanted by the circus. In an era of Miley Cyrus and Xbox, I can’t think of a better obsession to have.

Keaton is singularly obsessed with Cirque. Since seeing La Nouba in Orlando he has consumed every bit of media that exists on this french circus. Trust me, there are hundreds of hours of backstage Cirque interviews on YouTube, and he has watched them all. When he saw the big top going up at nearby Citi Field in New York he came home shouting “Mama, they’re putting up the chapiteau!!” What 8 year old talks like this? And what is a chapiteau? It’s french, for big top. But of course the world’s smallest Cirque fan thinks everyone knows that.

The show Amaluna is currently on tour, when they pull up stakes (literally) in mid-May they are headed to Boston, Washington D.C. and then Atlanta. You can buy tickets here, you can even pay for a backstage tour. I was hoping to write a story about what it’s like to experience a Cirque du Soleil backstage tour so I took a shot and sent a blind media request. When I sent it I included this photo of Keaton, the Junior Olympic gymnast, contortionist, french speaking, certifiable Cirque maniac. 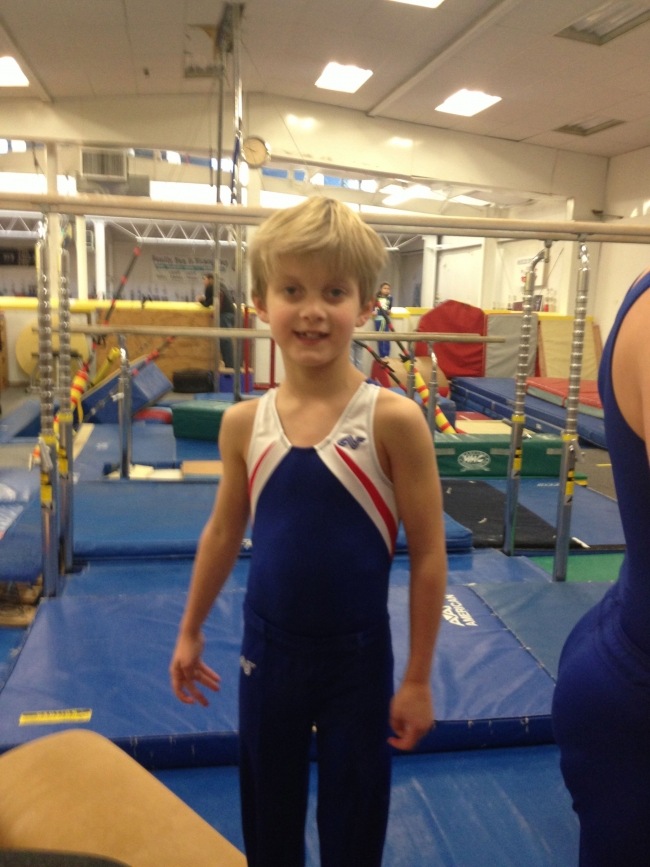 Dreams of running away with the circus

Since they are a massive organization, and besieged by requests from the likes of The Today Show, they even rang the bell on Wall Street, I assumed I wouldn’t hear back. I bought four front row seats to the tune of $200 each. For Keaton this was the Grand Prix, the best of the best, I decided to go big or go home. The backstage tours for sale are only offered on Friday nights and there was not one single Friday during the run of the show that we would be in town. The front row seats were worth it. The performers interacted with Keaton and his big brother. Duffy even got a hug from one. The night we went to see the show, I received a note in my inbox from PR saying that they thought Keaton was the cutest ever and invited him for a Cirque du Soleil backstage tour.

So a few days later we returned to see the show again, but this time we were headed behind the curtain and Keaton could hardly believe his dream was coming true. The cost of including the backstage tour with your tickets is around $500. There are other perks that come along with buying the backstage experience. Keaton could not care about any of those. He wanted to see the magic behind the scenes. 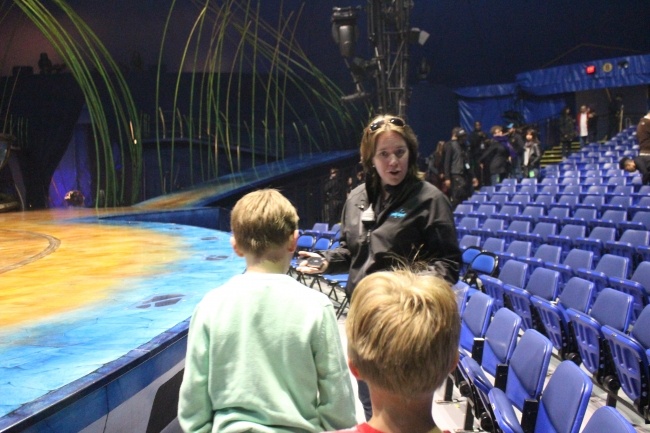 We were lucky enough to be hosted by Jamie,the company manager, who has been with Cirque for 12 years. Keaton even found a video interview of her on YouTube. She might as well be Selena Gomez in his book he thinks she’s so famous.

Though I had tried to express to the marketing people that Keaton REALLY is a super fan and REALLY knows all about Cirque even though he’s only 8, I don’t think it was until he started rattling off performer’s names and details about how many meals the traveling kitchen serves each day that they believed me. When he told Jamie that he knew the only other show that had the same carousel Amaluna uses was O she almost fell over. This kid has a Ph.D in Cirque du Soleil. Once backstage though he was so overwhelmed he was actually speechless. 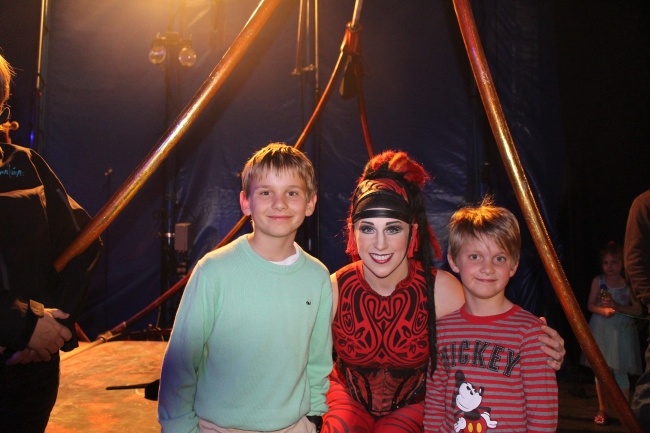 She practiced gymnastics 40 hours a week as a child. Keaton’s new goal.

We learned some amazing facts. Cirque is the best at what they do because they pay attention to every tiny detail. It’s extraordinary to see from the inside. The billionaire owner, Guy Laliberte, went in to space in 2009 as the seventh ever space tourist. One of his many snapshots of earth taken from space has been turned in to the covering for the landing mats on stage. The former street artist created Cirque in 1984 and has since revitalized the industry. 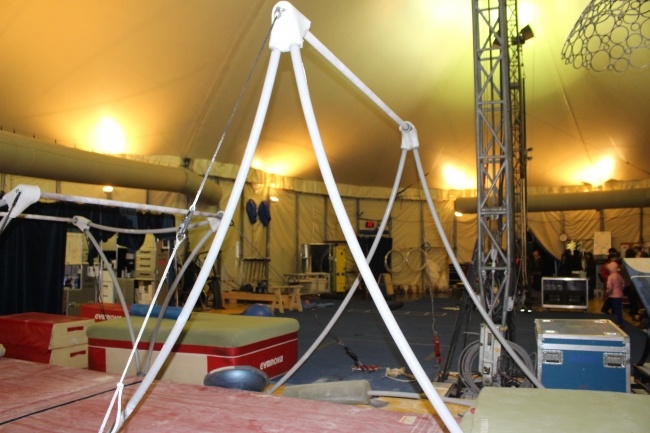 Each performer does their own make up. If you’ve seen their make up, that’s hard to imagine. The “look” is created for them and photographed. They are trained in how to reproduce it and have everything on hand they might need, including reference cards. One of the lead performers who juggles fire, of course, has a bald head and make up that circles his cranium. He does it all himself. I guess if you can juggle fire you can decorate the back of your head. 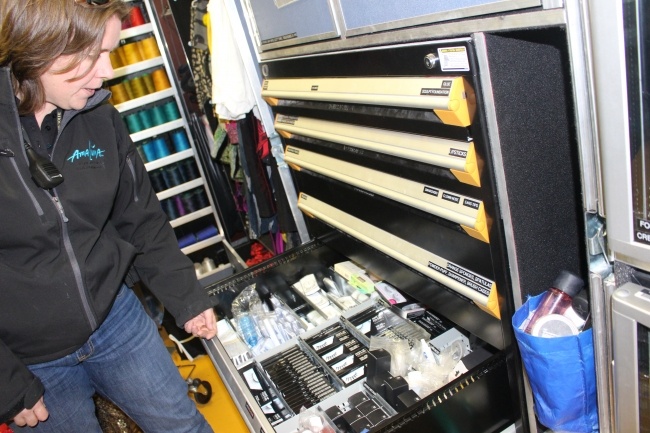 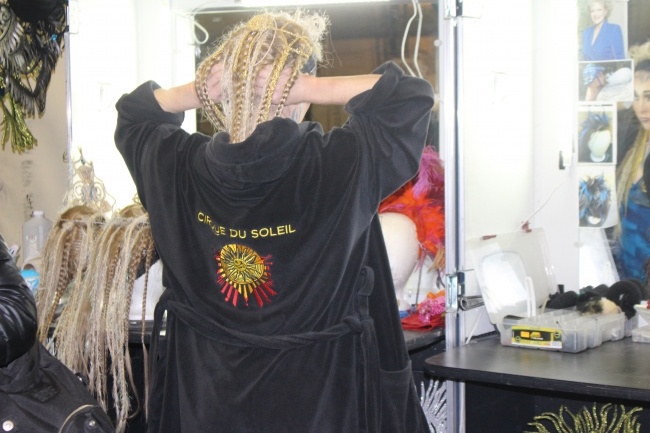 Keaton is dying for a robe

The scene of the performers grabbing a bite and maybe a drink under the lights is what I always imagined running away with the circus would be like. But with the grueling physical schedule I’m sure they were off to bed shortly. In each city they take up residence, they try to get corporate apartments, right now the performers are living in a New York hotel. How fun is that?? 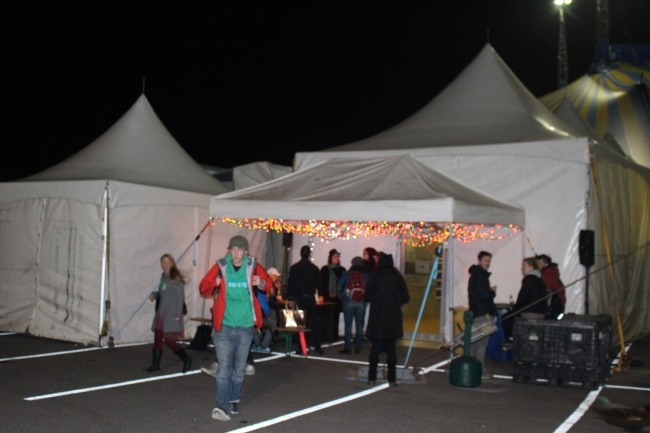 They have 46 artists.
The artists speak 17 different languages.
The show is transported by 65 semi tractor trailers.
The cast of Amaluna is 70% female and features an all girl band.
It takes a 7 days to set up the show but only 2 1/2 days to break it down.
The woman who does the sticks balancing in act in Amaluna is one of only 4 people in the world who can do that act.

But magic can’t be defined by numbers or facts. There is a mystery to Cirque du Soleil shows that defies explanation. How did they do that? And how do they continue to do that night after night? Maybe when Keaton runs away with the circus I’ll get my answer.

Thank you to the Cirque du Soleil marketing team for hosting us and a special thank you to Jamie for taking more time than she needed to and for answering every question and making Keaton’s dreams come true. It was a night he will never forget.