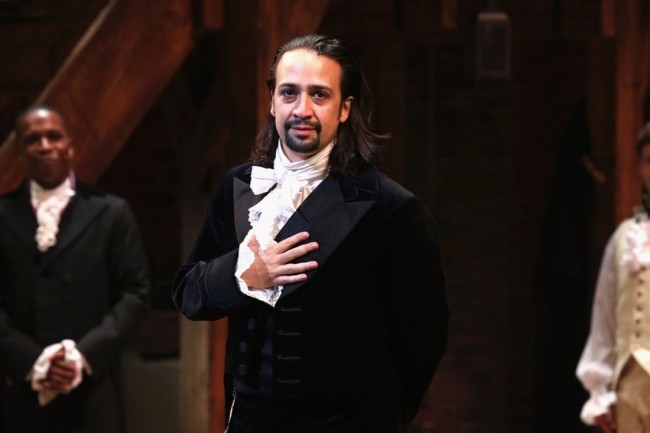 Hamilton, The Ritz Carlton and History

Hamilton is not only the hottest show on Broadway, it’s sparking an interest in American History amongst grown ups and teens alike. Who doesn’t want to know why Hamilton agreed to a duel? And we all now know that he was a “bastard, orphan, son of a whore, and a Scotsman dropped in the middle of a forgotten spot in the Caribbean.” If you don’t, seriously, you need to download the soundtrack today. Here’s the scoop on getting Hamilton tickets and adding on to your show and diving in deep for a little history lesson in lower Manhattan. 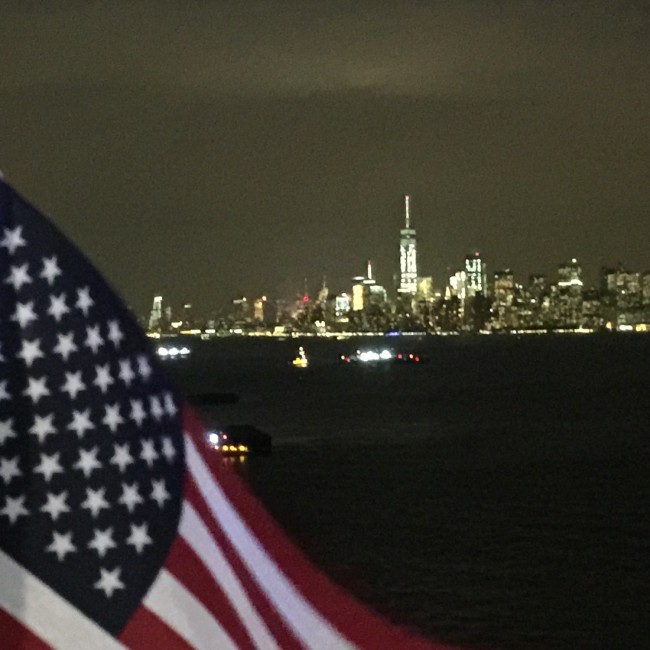 When we think about teaching our kids American history, we head straight for DC, Philly or Boston, and for good reason. However there is a lot of American history in New York City, in fact, Manhattan lays claim to being the first settlement. The Dutch settled here before the Pilgrims and took the name Manhattan from the Native American “Manahata”.  Did you know George Washington was inaugurated in New York? Here is an itinerary that will be a history lesson disguised as fun and served up with a Ritz Carlton doorman and some champagne. Who says learning isn’t fun? 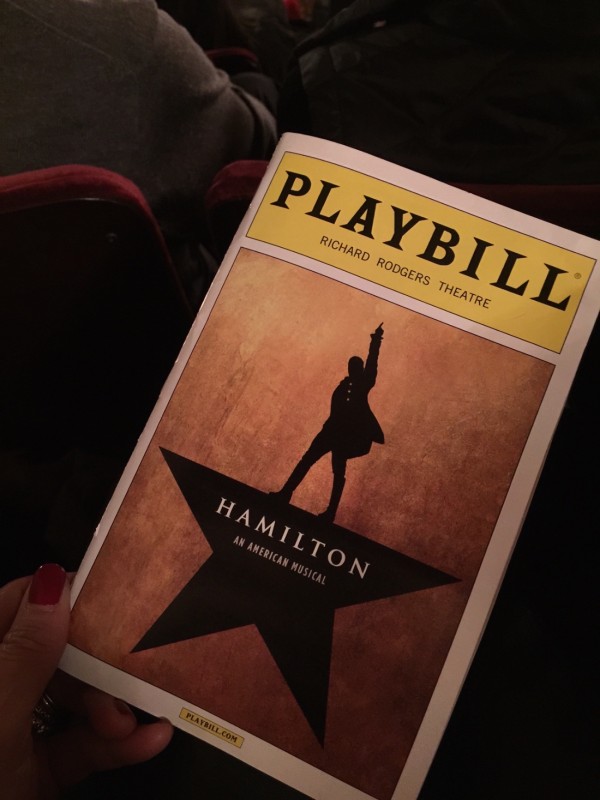 Yes you can get tickets. There are really two ways:  money or luck. We’ll start with luck. There is a lottery you can enter daily to win the chance to buy $10 tickets. Click here for all the details: Hamilton Lottery.

The other method is a little more surefire, buy the tickets. Yes, regular tickets are sold out for the next several months and likely beyond that. However you can buy resale tickets, they aren’t cheap, but they are worth it. You can use Ticketmaster, I’ve heard some StubHub horror stories. I bought our tickets through Jolie at In The Know Experiences, you can reach her at jolie@intheknowexperiences.com. I paid around $600 for last row tickets in Orchestra with about two weeks notice. 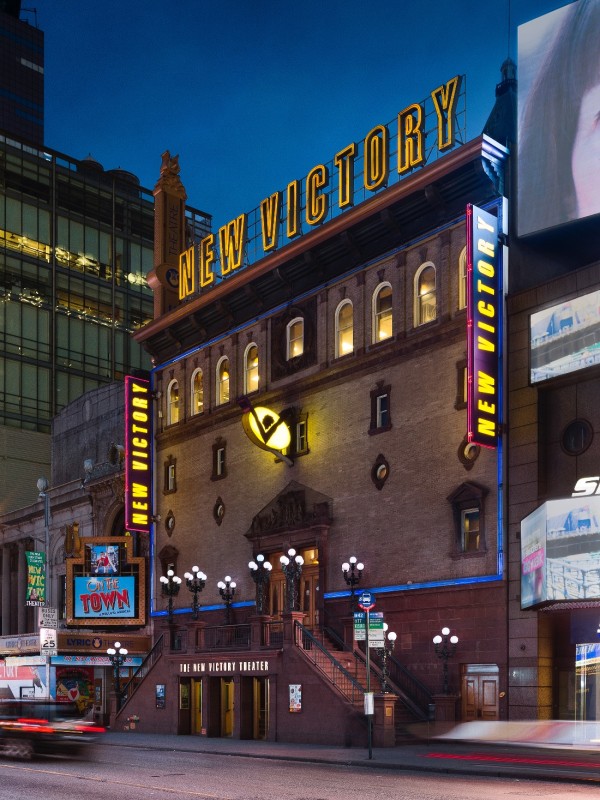 Hamilton ticket prices a bit rich? The New Victory Theater stages fabulous kid friendly programs and currently has a show called FLY, is a play and a dance packed action-adventure, with video projection and plenty of energy to engage kids in learning about the courage and resilience of the Tuskegee Airmen, they were the first black servicemen to serve as military aviators during World War II. Tickets start at $15, the theatre is on 42nd street and every show we have seen there has been impressive. This show is recommended for children 10 and older.  Learn more at the New Victory Website.

The Ritz in lower Manhattan is more than just the best place to stay with a family, it’s also the best view of Lady Liberty (I shot this from my bedroom there last week). Battery Park is some of the hottest real estate in the city right now, new restaurants are popping up everywhere and the transportation hub the Oculus recently opened after shutting down on 9/11.

Right at the tip of the island with sweeping views of Ellis Island, the Statue of Liberty, and the New York Harbor is the fabulously luxe Ritz Carlton. Not all Ritz’s are created the same, this Ritz has some of the best service and amenities I’ve experienced. Though I love the property at Central Park, the service at this property was better, and the views, well, the views. 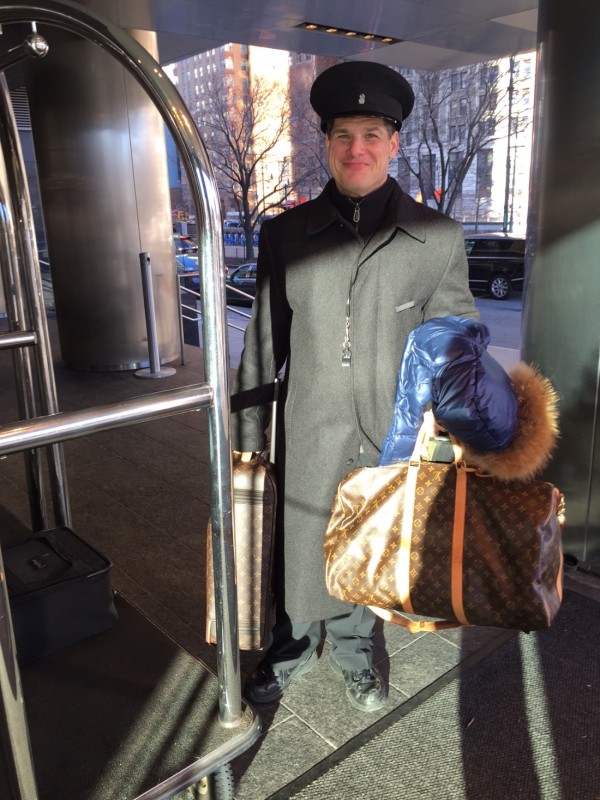 The Ritz in Battery Park used to be known as a business hotel catering to Wall Street execs and the like, not anymore. This grand hotel is decidedly family friendly. In addition to their attentive service, they offer a camping set up for families with a real tent, sleeping bags, child safe lanterns, pretend logs and frog sounds so little ones can “camp out” in the shadow of the most famous landmark in the world. This is offered in the Liberty Suite which also has a kitchen, separate living and bedrooms, it’s the perfect set up for families. In researching this story I read several hotel review websites who said this was not a family friendly hotel, because their reviewers DO NOT HAVE FAMILIES. This is why you can only trust Luxury Travel Mom. 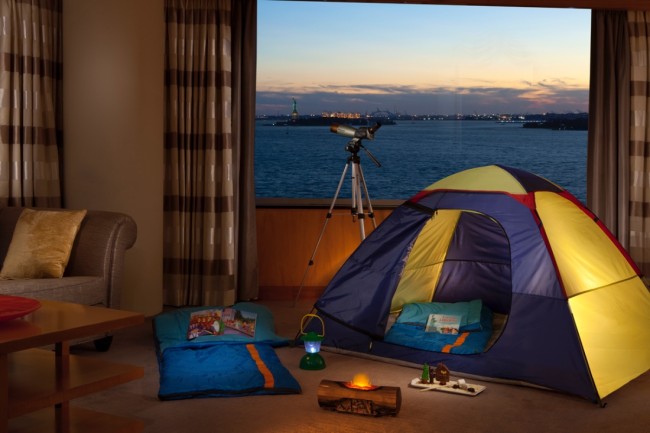 Have older children? They set up a roll away bed with the best view they will ever have. The club level offers food from morning to night, key for hungry teens. And of course, the famous Ritz candy jars in the club lounge are always popular. The hotel is about a five minute walk to the subway, which is my preferred method for getting around the city with kids. I’ve never felt comfortable riding in taxis with children on my lap, the 1 train is nearby and will have you up to Times Square in about 10 minutes.

Did I mention the wine in the club lounge? Teaching history is stressful, wine helps. Plan your stay at The Ritz by contacting your travel agent, I always recommend using a Virtuoso agent for upgrades, in room amenities, and most importantly, late check out. Don’t have one? You can borrow mine, Tim Burke. 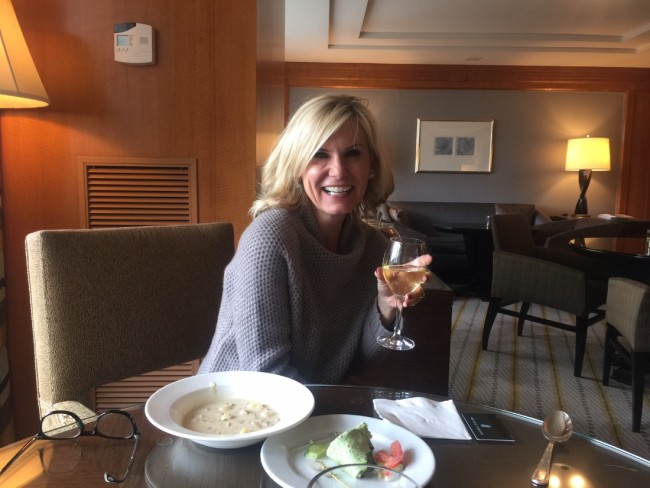 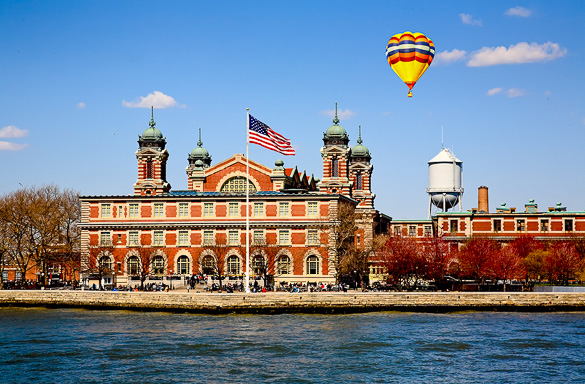 For the true history lover a visit to both can be time well spent. I however prefer to visit Ellis Island and just see the Statue of Liberty from the water. The best view of Lady Liberty is of course from your suite at the Ritz, the second best way to see it is by taking a Circle Line Liberty Cruise down the Hudson, you can snap a photo on the way down and back. A less expensive and equally photo friendly method is take the ferry to Staten Island, turn around and come right back, trust me. 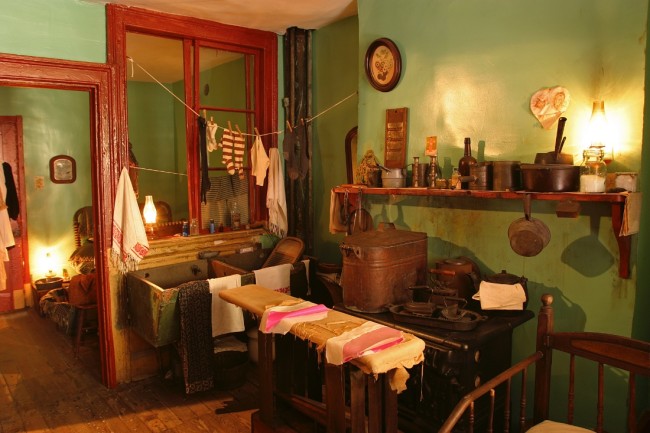 Located at 97 Orchard Street on the Lower East side this relatively unknown peek into the world that was life for immigrants in the 19th and 20th centuries is a time capsule. It’s a quick tour that really brings to life the historical immigrant experience, kids love it. The five-story brick tenement building was home to an estimated 7,000 people, from over 20 nations, between 1863 and 1935 and is now a National Historic Site. It can only be seen by guided tour, plan your visit before arriving by visiting Tenement Museum New York City. 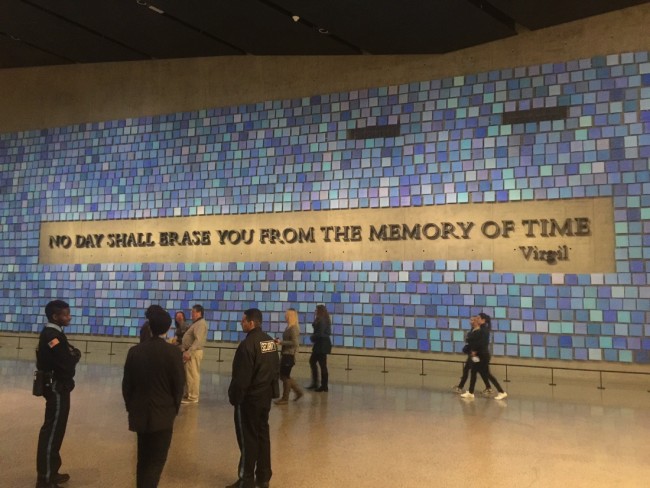 For those of us who lived in or worked in New York in 2001 this museum is important, and fraught with emotion. Our family are inaugural members of the museum, and I visited for the first time last week. The museum is a short walk from the Ritz in Battery Park, it’s also easily accessible from the subway. My son was a baby on 9/11, he was 16 when I took him to the memorial recently. He told me, “I know so many kids who lost their dads, but I don’t know much about what happened that day.” The museum has the air of a holy place, it felt similar to our visit to Pearl Harbor. Visitors are quiet and respectful. Each exhibit takes you deeper into that awful day. I wasn’t prepared for the emotion I would feel trying to explain to my son what it was like for everyone on September 11, it was Macie’s first day of preschool, we picked her up early, certain that our entire country was under imminent attack. My friends received phone calls from their husbands saying that they loved them, never saying that they wouldn’t be coming home. We gathered at church together the next day to cry and to pray. We were all sure that everyone was just “missing”. The missing posters have been preserved, the television news segments from that day play from the televisions mounted around the exhibits, photos fight to take away your breath. The hardest photos to view are hidden and clearly marked as disturbing. I cry every 9/11, and I cried in the museum. As hard as it is to revisit, our children need to understand this part of our history as well. Plan your visit at National September 11 Memorial & Museum. 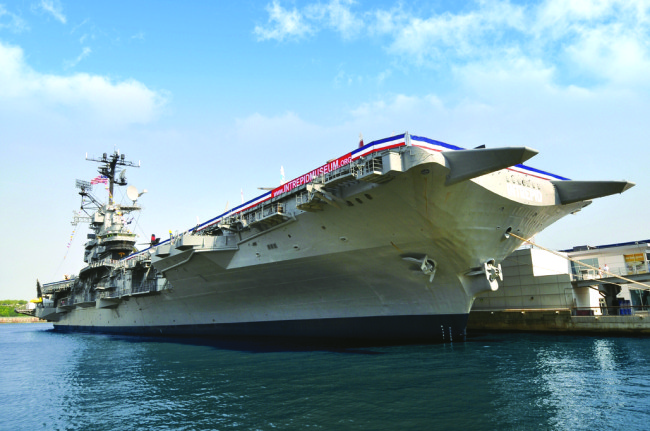 The USS Intrepid is one of 24 Essex class aircraft carriers used by the US during WWII, Korea and Vietnam. During WWII, the Intrepid saw action in the Pacific and was hit by several Kamikaze planes, but was not sunk. It sits on the west side at 46th street, this is a great stop before or after a Circle Line Tour. The new exhibition “On the Line” explores the ship’s, and our, involvement in the Vietnam War during the time it was active in Gulf of Tonkin. The BA Concorde is also onboard the Intrepid, I always dreamed of flying to London on it (a quick 3 hour flight), it never happened, but touring the aircraft is fascinating. Plan your visit at The Intrepid Sea, Air & Space Museum. 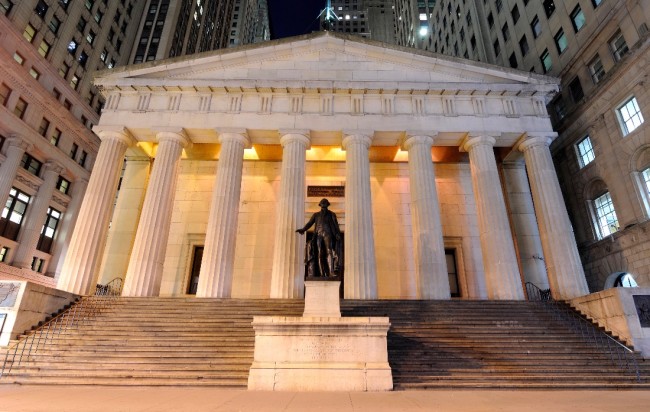 Here on Wall Street, George Washington took the oath of office as our first President, and this site was home to the first Congress, Supreme Court, and Executive Branch offices. The current structure, a Customs House, later served as part of the US Sub-Treasury. Now, the building serves as a museum and memorial to our first President and the beginnings of the United States of America.

Be aware, the interior is closed on weekends, plan your visit here: Federal Hall National Memorial.

We were hosted at The Ritz Carlton for the purposes of a review, all other expenses were covered by the Bank of Mom.