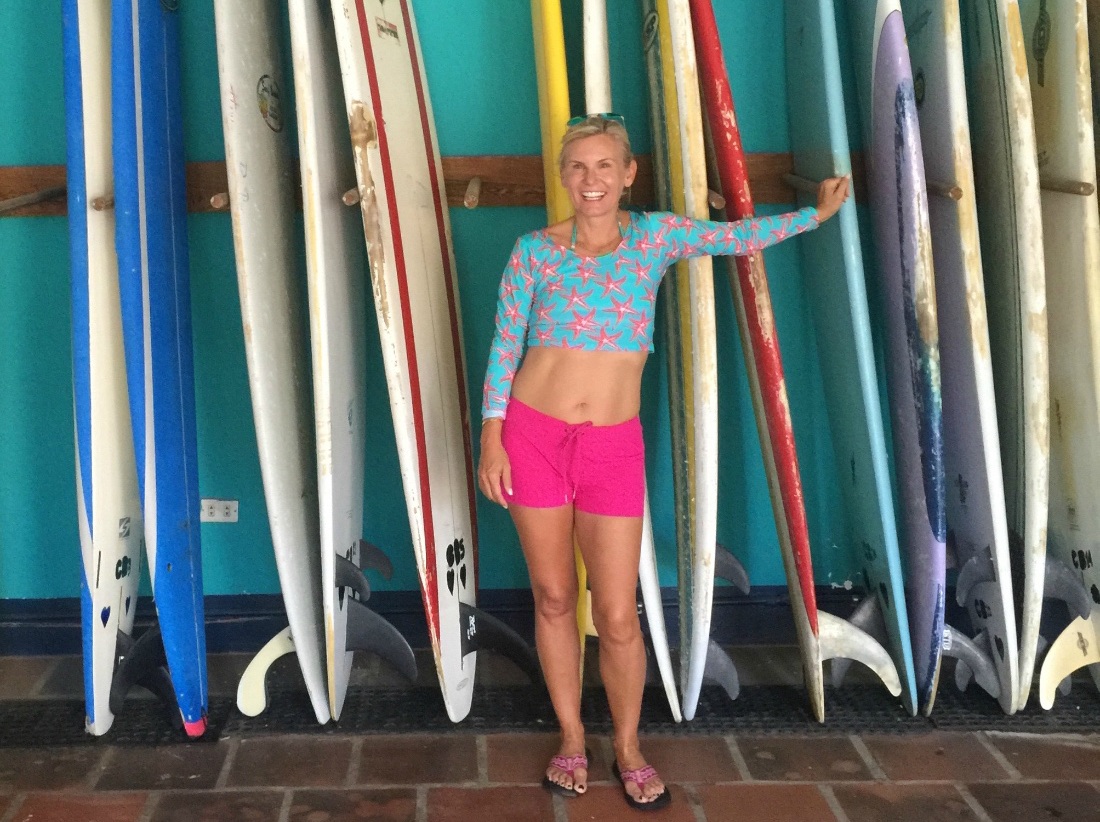 When you think of “all women’s surf camp” do you imagine toned young beach babes with stylish tattoos and tiny bikinis riding waves, drinking beer and generally looking like a Roxy commercial? 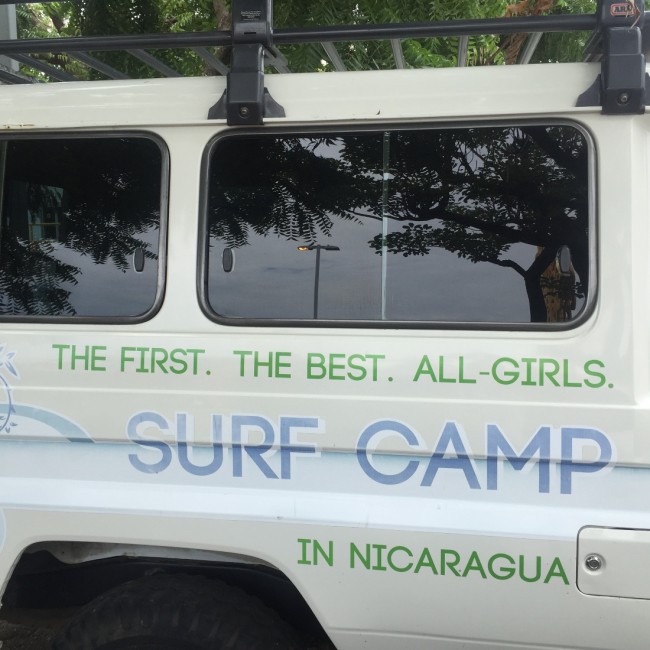 The story idea was mine, I wanted to try a surf camp, Greenwich Magazine bought the story and I was off to Nicaragua to live with a group of other journalists I had never met, turn 49, and hopefully master surfing.

I have to be honest, their marketing video intimidated me, it features a lot of hot young women apparently surfing from a boat. How do you do that I wondered?.Weren’t there sharks that far out? I’m not young and hot enough to pull off the sexy one armed surfer look. Also, what was I supposed to wear? I had tried surfing before and knew that they are called rash guards for a reason, I bought three. I also bought surf leggings (yes, those are a thing), a shortie wetsuit, new bikinis that wouldn’t fall off, and of course flash tats. I figured if I’m going to have a mid-life crisis, I was going all in, much to the horror of my children. Yes, I am doing a packing list for you, natch. 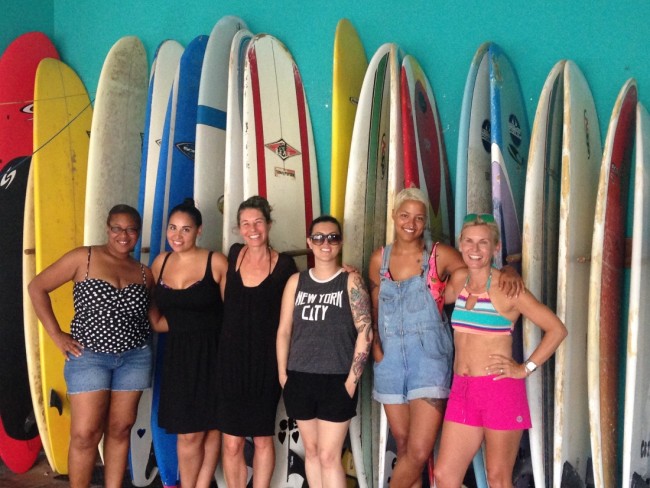 Surf Camp was everything I had hoped it would be, and so much more. We drank cold beer and rode waves, we conquered our fears, we became stronger and more bad ass, we got pummeled by the ocean and Mother Nature, we mastered the ocean and Mother Nature. We were not hot young chicks with perfect bodies, I was the old lady at 49, some girls were in their 20’s, some had just learned to swim (yes, you read that correctly), we left the best of friends, and we all left surfers. The name of the camp is Chicabrava, in Spanish it means “Brave Girl”, and that is exactly what we became.

What to Expect at Chicabrava Surf Camp

You fly into Managua where you are met by the gals from Chicabrava in the surf jalopies they purchased from the television show “Survivor” when they filmed in Nicaragua several years ago. The drive to San Juan del Sur takes about 2 1/2 hours, the tiny beach town is actually only 30 minutes from Costa Rica. When I first told my husband I was going to surf in Nicaragua he was nervous about my safety, it turns out that Nicaragua is actually the safest country in Central America. The beach town of San Juan del Sur is heavily populated with surf obsessed ex-pats and some very cool new small hotels. The prices are still reasonable however, a mojito is only $2. Seriously, that is reason enough to go. All the major airlines fly there, I flew Delta. Managua is a lovely modern airport and actually a great place to buy souvenirs while you are waiting for your shuttle. 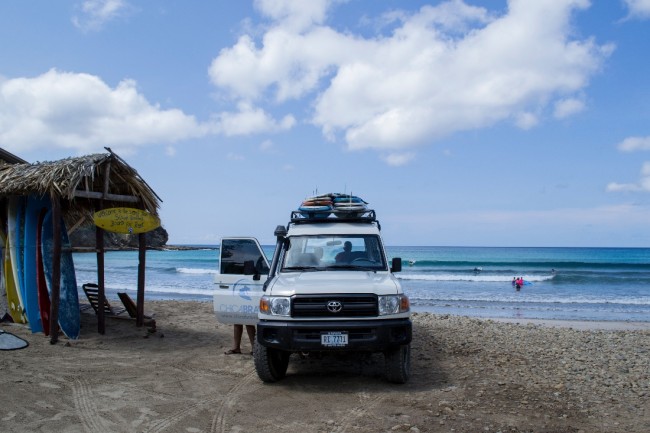 There are two housing choices, Surf House and Cloud Farm. Surf House is in town and is very spare, and I mean spare. They recommend bringing earplugs so you can sleep. The entire experience is not that expensive, pay up for Cloud Farm, trust me. You’ll stay in a house high up in the hills with stunning views, an infinity pool and lovely rocking chairs on the back patio. The experience is designed so that you share a room, I don’t remember the last time I shared a room with anyone that wasn’t my child. Lisa and I became fast friends and I learned that she is deathly afraid of moths, well really all bugs, and there are bugs in the jungle. The beds have mosquito nets over them and in addition to making you feel exotic, they turn out to be very useful. My only complaint about the shared room situation is the lack of bathroom door, even with a close friend it’s weird, with a stranger it’s just awkward. We were very polite and took turns using the bathroom and kept our space clean, it felt a little like summer camp, but with rum. Note to Chicabrava, buy doors. 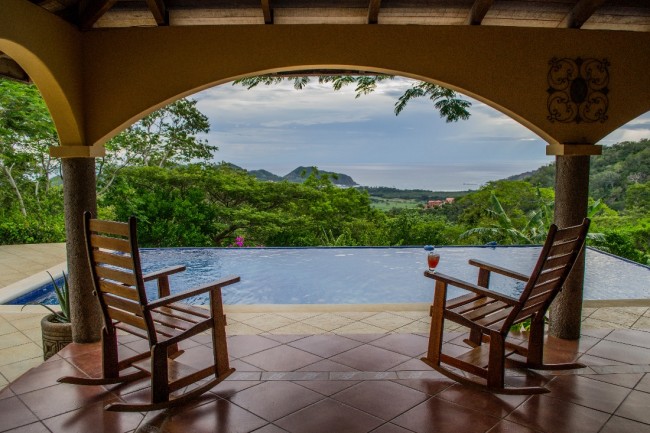 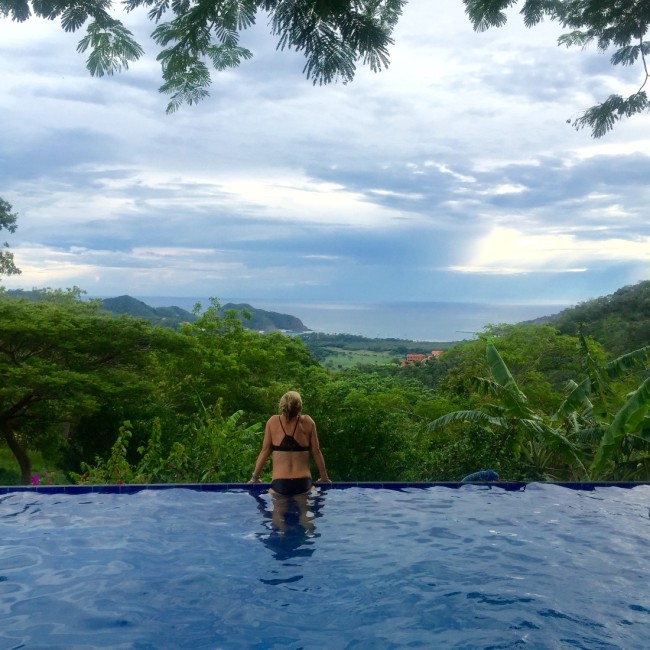 Your first stop is a meeting in the board room. There are no high leather chairs or conference enabled telephones, it’s room full of surf boards and Elsie who will size you up, ask about your experience, skill level and fear factor, she’ll choose just the right board for you. This board will become an extension of you for the rest of the week, you’ll hoist it on top of the jeep, wax it, ride it, cry on it, hate it, love it, miss it when you leave. 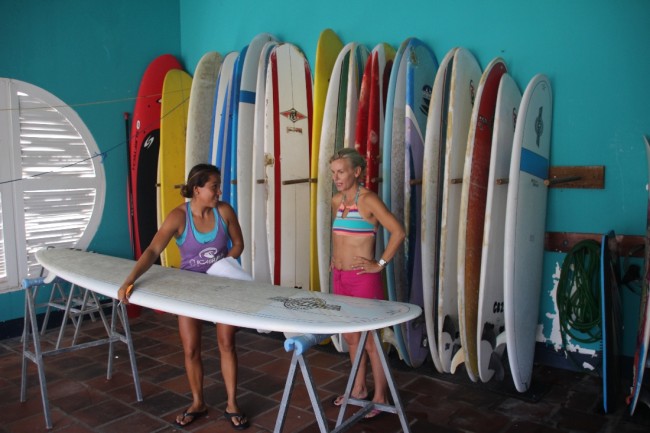 Then there is classroom time every morning, turns out there is more to surfing than just standing up on a board and looking cool. Each morning we learned how to master the pop up, wave theory, surf etiquette and we set goals. Remember that scene in “Blue Crush” where they get in a fight with the locals? Yeah, that can happen, you have to know who has the right to the wave and it’s not as easy at is seems. I got cut off by some dude with his butt hanging out of his swimsuit, I still think I had the right of way. 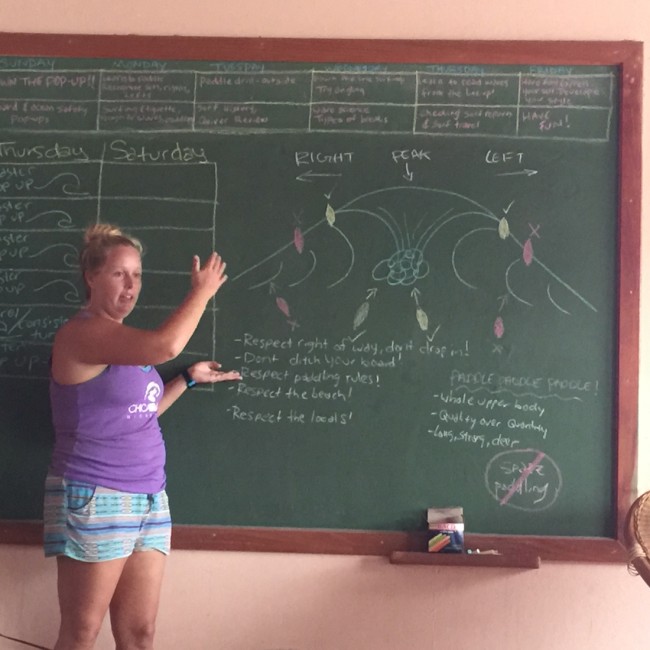 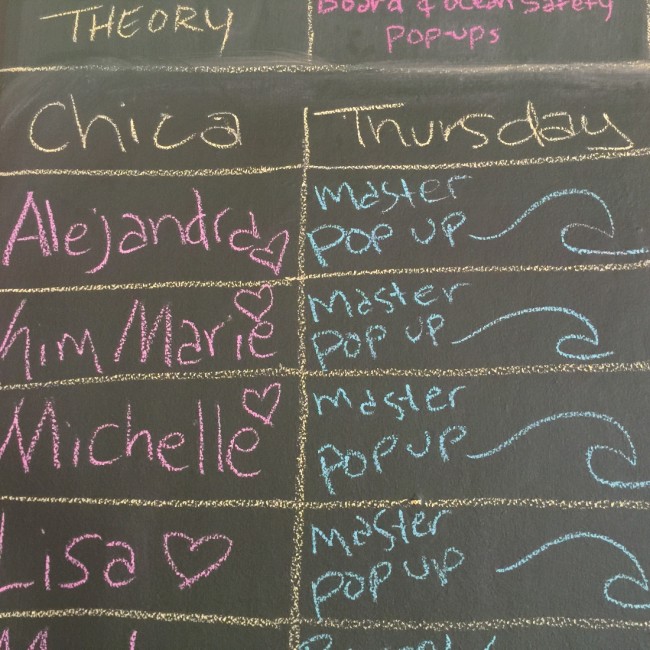 After working on our pop up techniques at Surf House, hint, start doing your planks now ladies, we loaded up our boards and headed out to the beach. This was the first time I got the real sense of what a girl power trip this was going to be. We had to stack over ten boards on TOP of the jeep, no dudes, no butlers, no step stools. #shortgirlproblems 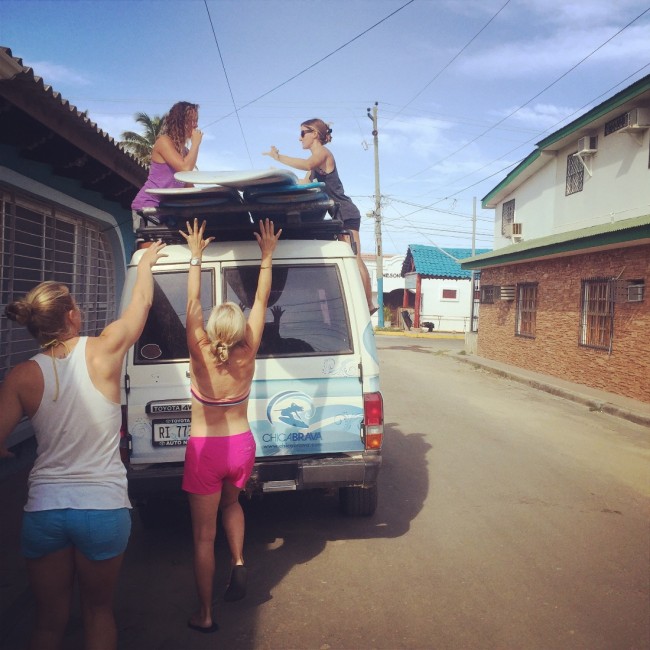 Popping up on a moving surfboard turns out to be VASTLY different from popping up on the ground. We can start with the unstable board, the fact that it is FLYING and include fear of death. Of course I stood up the first time, rode like a pro and decided I was the most bad ass beginner EVER. For this hubris the surf gods punished me for the rest of the day with saltwater up my nose, crashes into the beach and general exhaustion. As I crawled out of the ocean the first day I felt like I had done hand to hand combat with Mother Nature, and lost.

The surf coaches arrive for breakfast at Cloud Farm, I should mention that you never make a meal, all of your food is provided and it is tasty, not gourmet, but really good South American fare. Day Two starts with a video review of your performance the day before. Luckily, they keep rum next to the coffee machine. I’m serious. Also, I bought a bottle and now keep it next to my coffee machine, it just makes me feel better knowing it’s there. 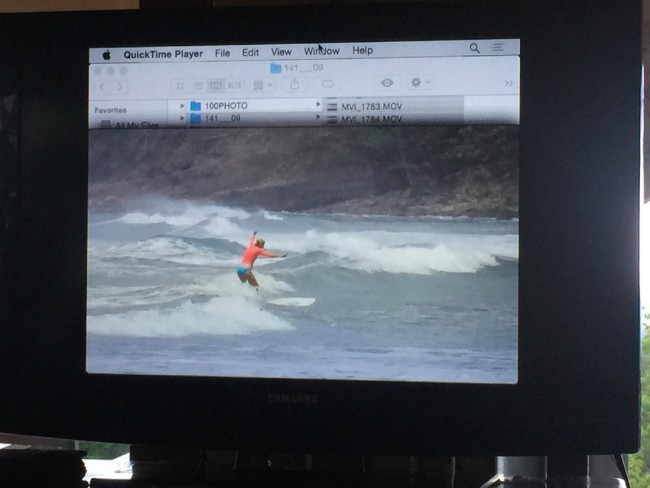 Day two also happened to be my 49th birthday. I had visions of being a surf goddess with flowing beachy locks, flash tats and onlookers whispering “how can she be 49, look at her surf?!” The surf gods had other plans for me, yes, those are rocks, yes they hurt, I still have the bruise to prove it. 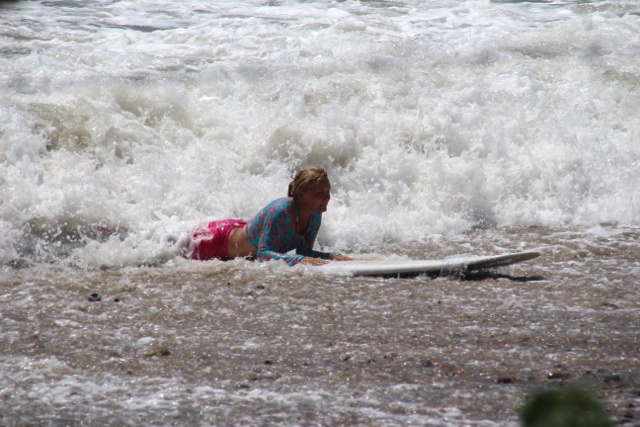 Thankfully the mojitos are cheap and having your birthday with a pile of new best friends is awesome, we hit the town for a dinner out and they even made me a poster of my new favorite saying: “THIS IS 49 BITCHES”

Surf camps usually last for a week, we had an abbreviated session so we were only there for three days. In the morning we surfed our new favorite beach, Playa Hermosa. It’s a private beach, a whole $3 to get in, and offers cocktails on the beach for celebrating after you ride.

Day three was my day. It all came together and my surfing, while not ESPN worthy, felt pretty epic. After this ride I will admit I cried tears of joy. I have heard other surfers talk about the emotions this sport brings out it you, it is honestly like nothing else I have ever done. I have skied off cliffs with Olympians, played tennis with world champions, climbed ice towers, water skied in Mauritius, chased a tiger shark while snorkeling in the Maldives, but this day, this moment here, will forever be the most incredible sporting moment of my life. Until I go again that is:

Planning Your Own Epic Surf Retreat:

You book online at the Chicabrava website. If you have questions about where to stay, etc, please feel free to e-mail me. A packing list is coming next, I bought most of my gear on Roxy.com. Even when it wasn’t cold I loved my shortie wetsuit, it was comfortable and didn’t ride up.

There are a variety of extra activities that you can book while there. We did a horseback ride around the farm, got massages in town and went on a catamaran ride. I would not recommend the horseback ride unless you already know how to ride. Our horses were delivered to us with rope instead of reins and a guide who didn’t speak English. Luckily I do know how to ride and I’m fairly bossy so I gave our group a quick safety lesson and guidance while we rode. We did see a sloth in the tree on our ride, which was something I can say I have never seen on horseback before. The massage in town was great and the catamaran ride was absolutely magical. We had a pod of dolphins that swam alongside and did tricks, I am not kidding you. No I don’t have photo proof, you’ll have to trust me. Also, there was rum and music onboard, so even without the dolphins, it’s amazing. 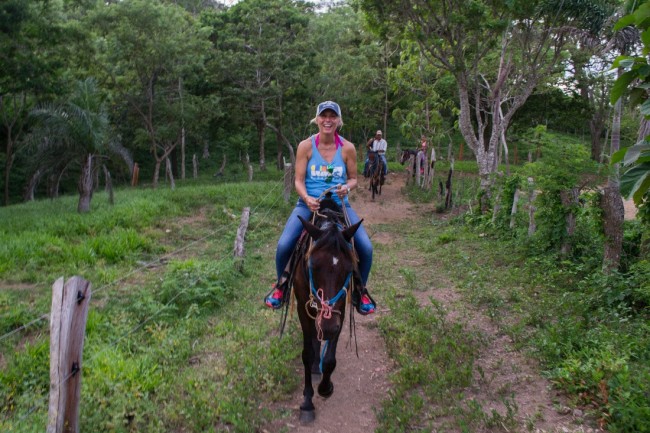 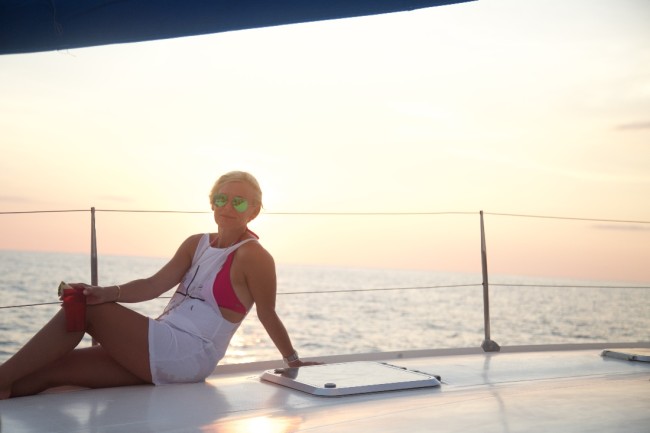 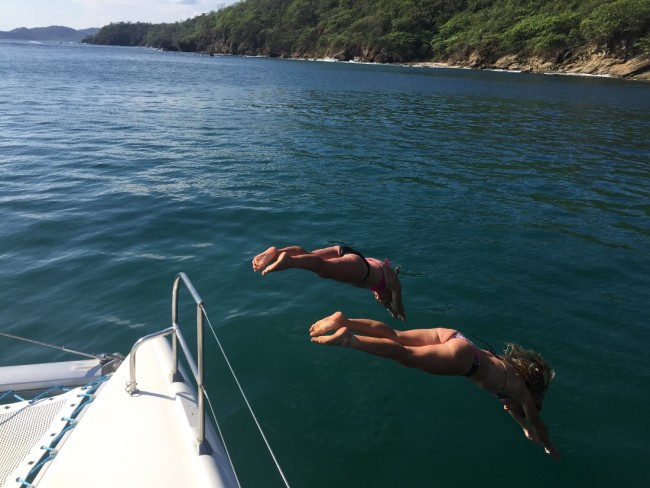 Still thinking about it? Here are a few more photos. I was lucky enough to travel with an amazing group of journalists with mad photography skills, check them out at:

Alejandra at AlwaysOrderDessert – in addition to being a smokin’ little hottie, she does recipe segments for the Today show.

Michelle at MichelleNorrisPhotography – not only is she stunning and a natural surfer, she is a crazy talented photographer, seriously, go check out her photos

Breanna at BreannaJWilson – she calls herself a travel bad ass and freelances for MTV, Forbes and others

Lisa at LisaHynesPhotography – despite learning to swim LAST YEAR, this bad ass surfed! And was a fab roomie 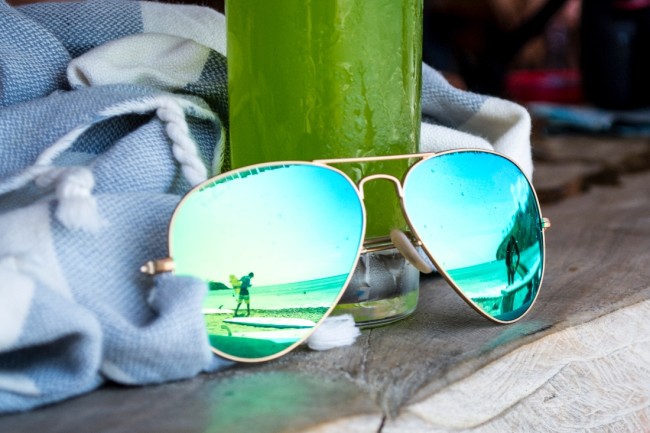 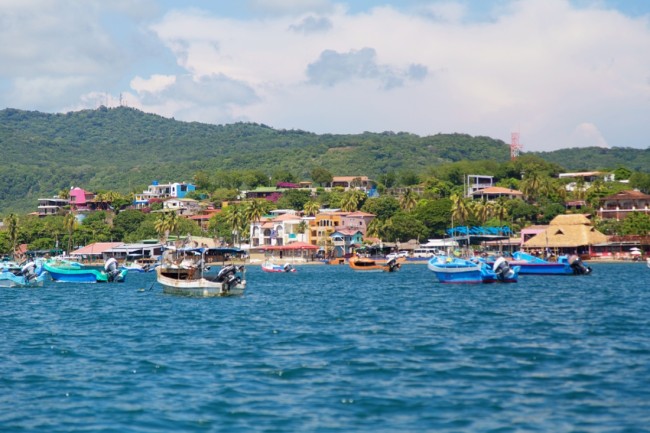 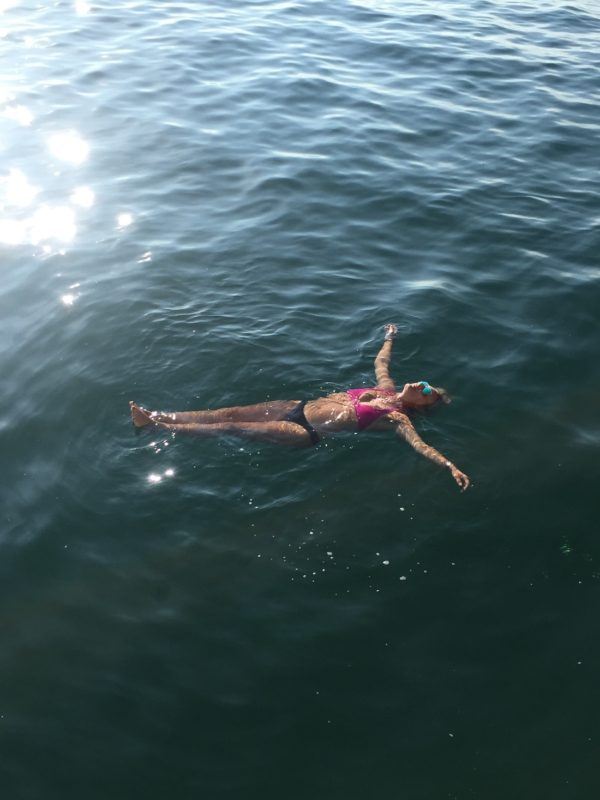 This was a press trip, as such my accommodations and surf lessons were paid for. I paid my own airfare and for all alcohol and meals outside of the surf camp. Airfare was only around $600 if I remember correctly, and with mojitos that only cost a few bucks, this is not a break the bank trip. A typical week is around $1,900 for a stay at Cloud Farm, Surf House is only $1,300. I think it’s more than worth the extra $600 to move up to Cloud Farm. Prices include surf board, lessons, transportation and meals. Being a bad ass cannot be bought, you need to earn that the hard way.