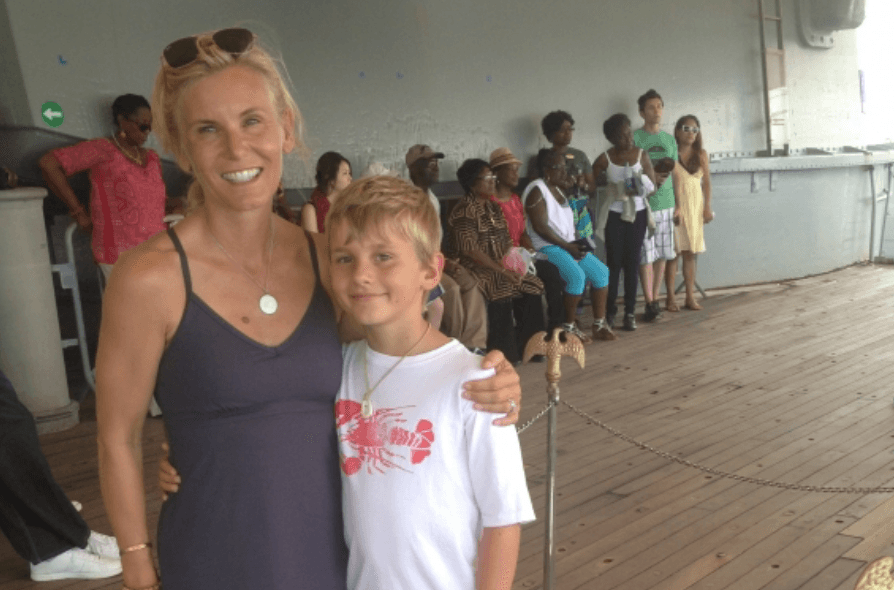 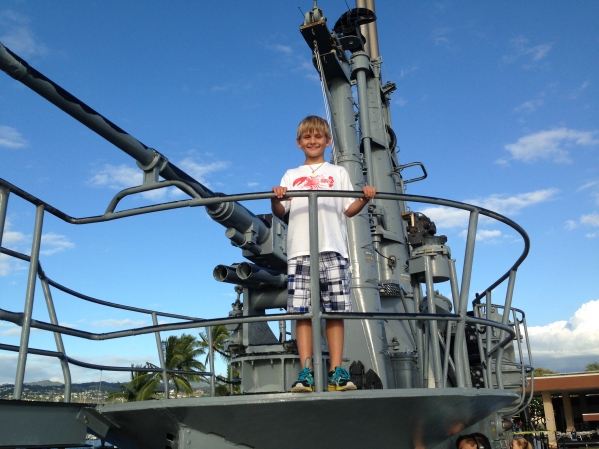 You might think that Pearl Harbor is too serious or too grown up for your children to understand, you would be wrong. Wilson’s teacher Mr. DiMinno brought history alive in such a way that the ONLY thing Wilson wanted to do for his 10th birthday was to visit Pearl Harbor.

When each of my children turn ten they get a “Mommy and Me Ten Year Old Trip” – Wilson could have gone anywhere, thanks to his amazing teacher, he wanted Hawaii, so that he could pay his respects at Pearl Harbor. There are few places that can really bring home the sacrifices made by our soldiers like Pearl Harbor. This is a must stop for anyone visiting Hawaii. 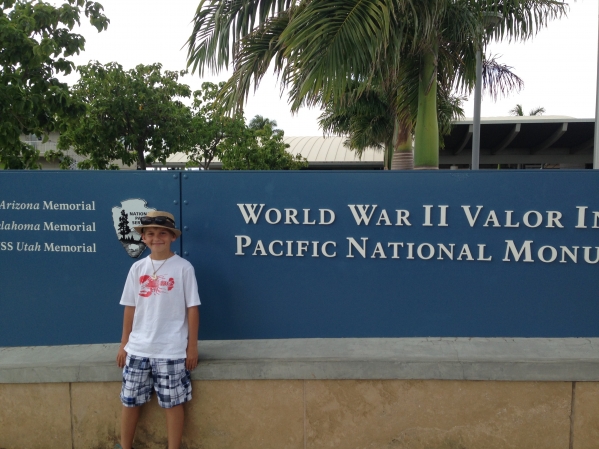 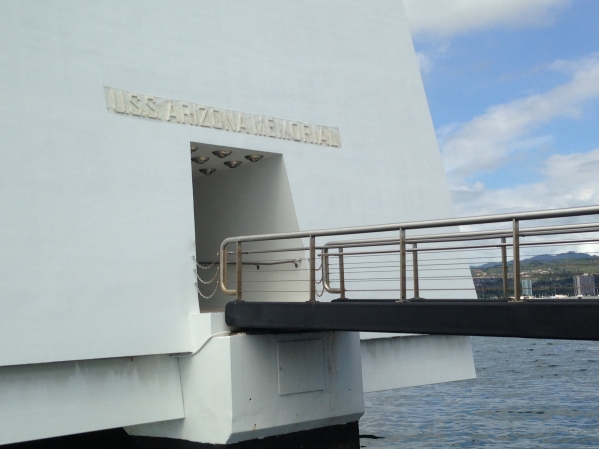 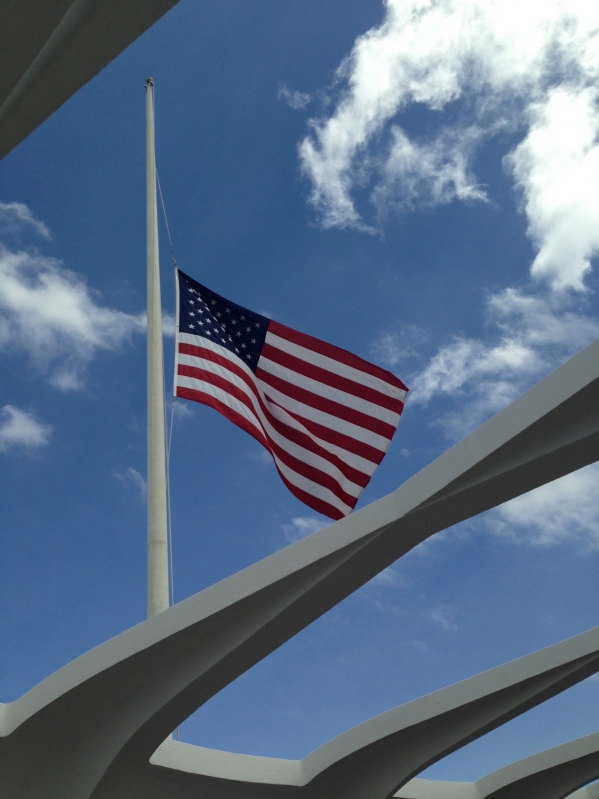 Getting To Pearl Harbor:

Pearl Harbor is on the island of Oahu. We flew out of the Honolulu airport, most major flights leave from there, so we saved our visit for our last day. We got to Pearl Harbor early, spent the day touring the memorials, ate dinner at the airport and caught our flight home.

Pearl Harbor is a short drive from the airport. We stayed at Disney’s Aulani, getting to Pearl Harbor from there takes about 30 minutes. Taxis are pricey in Hawaii, you are better off renting a car, parking is easy and convenient at Pearl Harbor Visitor Center.

Buy advanced tickets, there are a limited number of walk-in tickets. You can buy tickets at the official website: Recreation.gov.. I recommend the Passport to Pearl Harbor, $65 for adults, $35 for children. (Prices updated May 2016)

Upgrade your tour on the USS Missouri and do the “Heart of the Missouri” tour. Buy the upgrade here or do it onsite. You get a tour of the inside of the Mighty Mo, children must be 10 years or older to do this tour. It’s an extra $52 for adults, $25 for kids. I am not a history buff, and I loved the tour.

The Passport  to Pearl Harbor will get you a boat ride to the iconic USS Arizona Memorial, the resting place of more than 1,000 sailors and marines killed on Dec. 7, 1941. This is hallowed ground. I was impressed by Wilson’s solemnity, he removed his hat, didn’t say a word and quietly paid his respects. We were both moved to learn that 23 pairs of brothers died together that day and that many of the Pearl Harbor survivors choose to be interned with their fellow crew members when they pass. This tour is entirely appropriate for children and as emotional for adults as you might imagine it to be. Bring tissues. 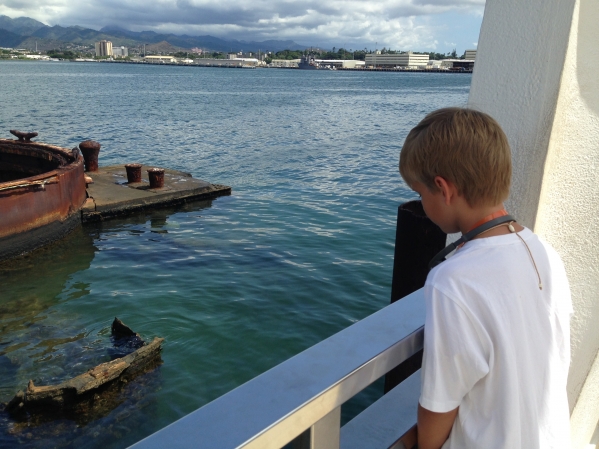 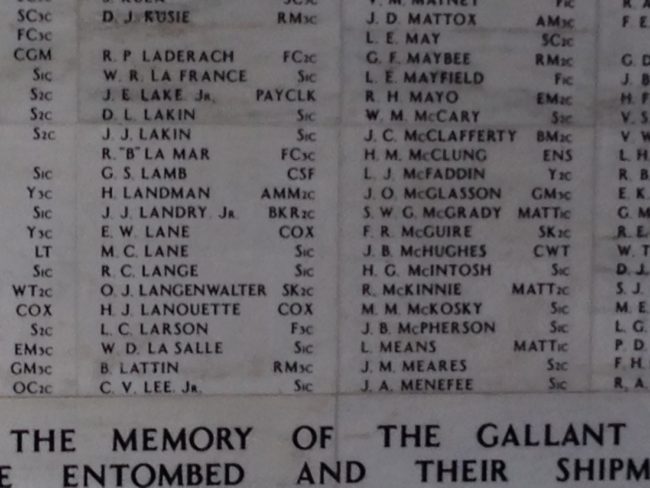 The “Mighty Mo” is a short bus ride away from the park on Ford Island, there is a snack shop with food, drink and shaved ice (important to know with children). I will admit that I knew nothing about the Missouri before our tour. If you, like me, don’t remember your WWII history, the Missouri was the site of the Japanese surrender. The surrender documents are on display. The spot where the actual surrender occurred is marked by a medallion and cordoned off. I was surprised to learn that the Missouri was called back in to service in Desert Storm and went back in to battle with the medallion in place.

On the deck where Wilson and I are standing, representatives of the Empire of Japan were directed to step forward and sign the two copies of the Instrument of Surrender. General MacArthur then signed on behalf of all the Allied powers followed by representatives of Allied nations in attendance. General MacArthur concluded the ceremony by saying: “Let us pray that peace be now restored to the world, and that God will preserve it always. These proceeding are closed!” With those words, World War II was over. 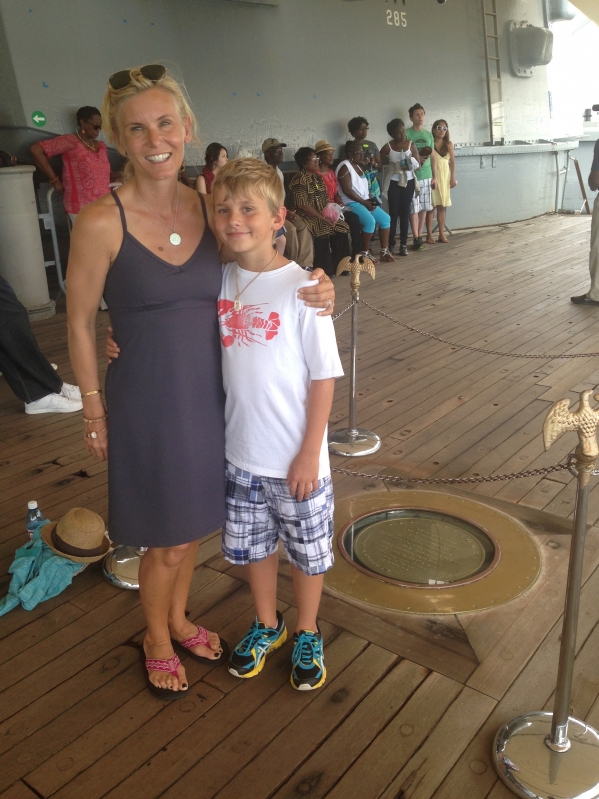 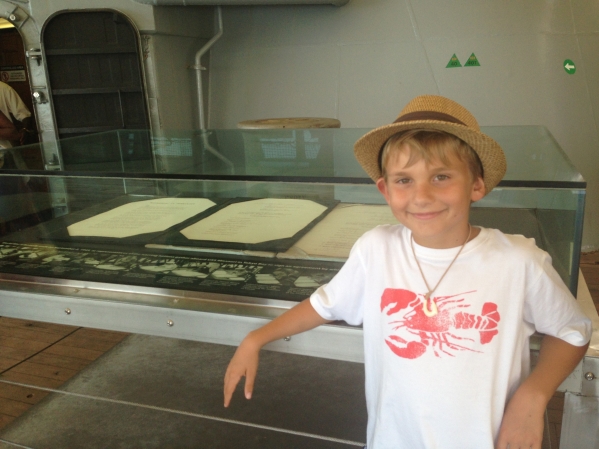 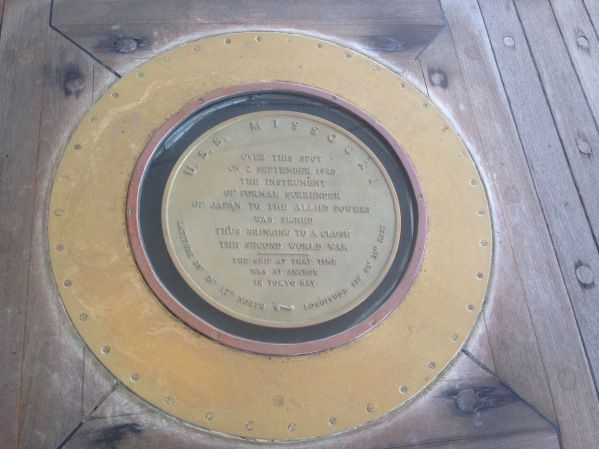 With the Heart of the Missouri tour, you get an inside look at the workings of this mighty battleship. You actually crawl in to one of the gun turrets that still feature the hand painted artwork of the sailors who put it there in the 1940’s. The sense for the bravery it took for the 100 men it took to fire each round from the six levels of the turrets is nothing short of awe inspiring. 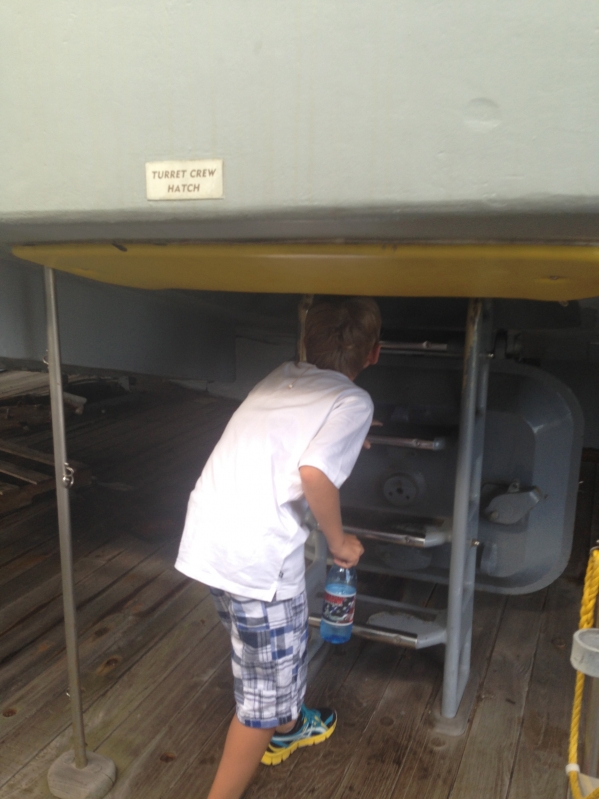 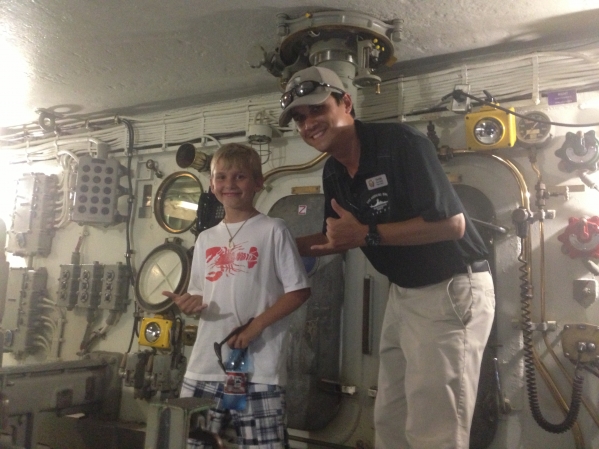 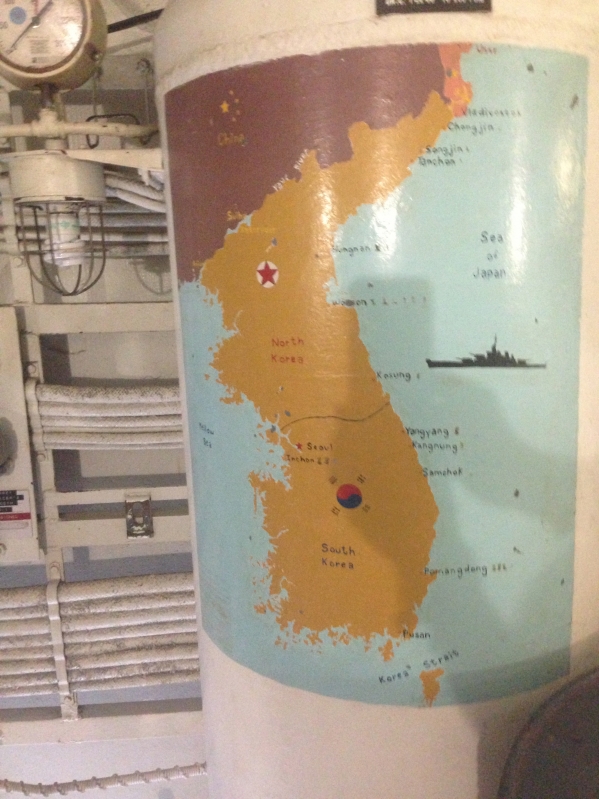 The other incredible story that is often untold is that of the kamikaze pilot whose plane glanced the side of the Missouri, the dent is still there, his body landed on board and the sailors of the USS Missouri hand stitched a Japanese flag and gave him a proper burial at sea. 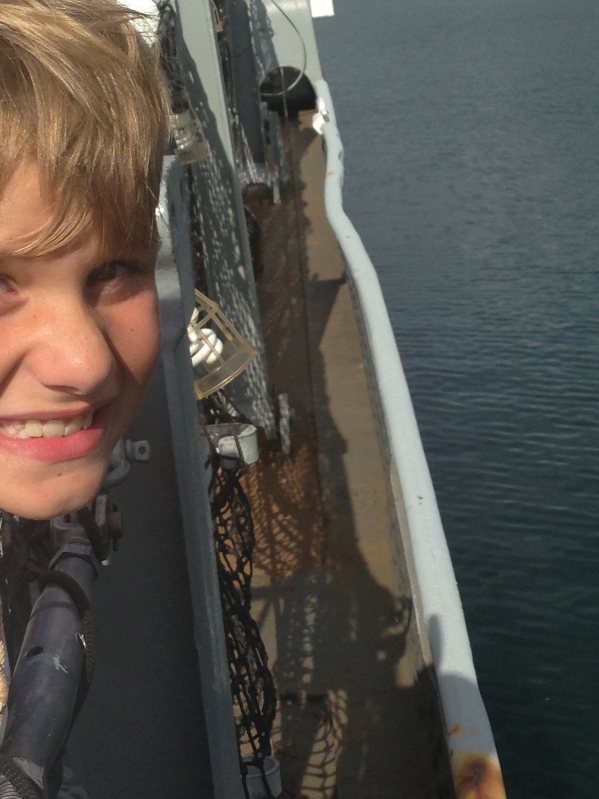 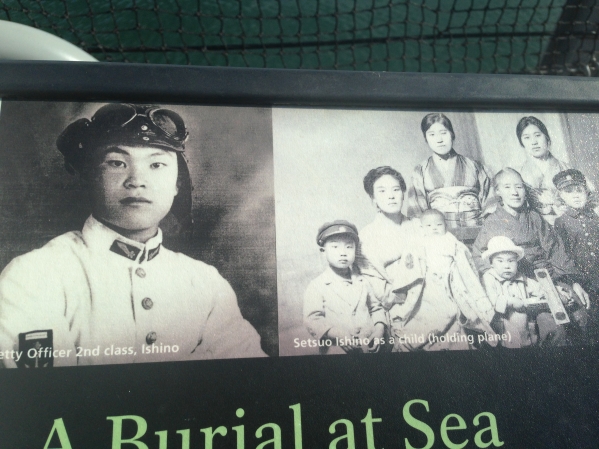 This little sub might not seem like much or worthy of your time, but it is a quick tour and this tiny submarine did more damage to our enemies in WWII than you might imagine. Wilson had learned all about the Bowfin at school and this was in fact the highlight of his trip. Known as the Pearl Harbor Avenger, this little sub sank 23 enemy ships. 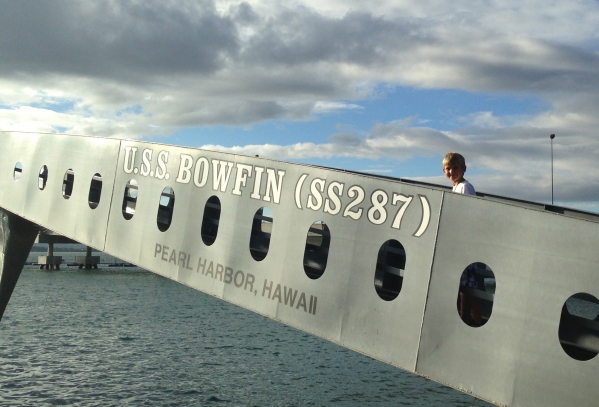 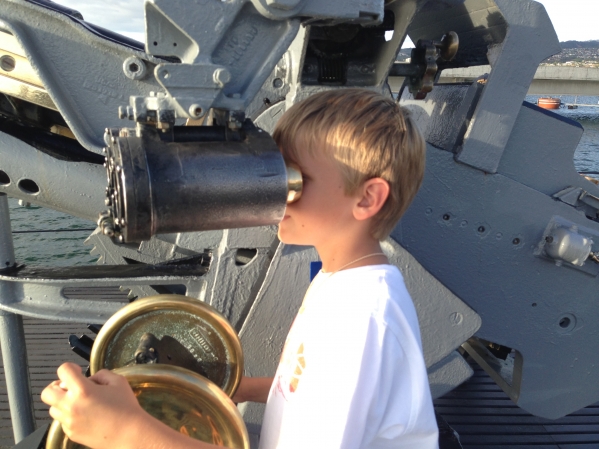 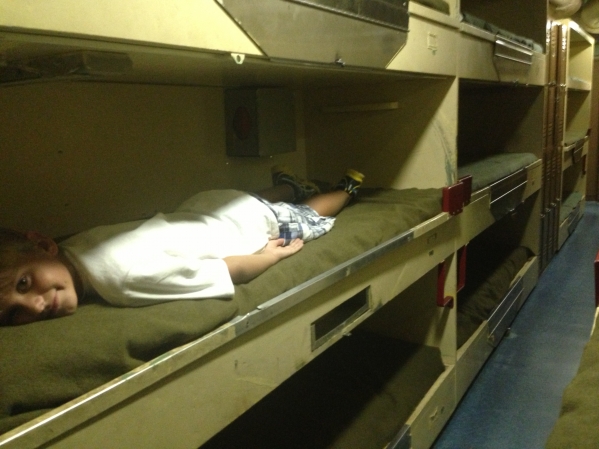 We were at Pearl Harbor for over 5 hours and did not make it to the Pacific Aviation Museum. I cannot stress how important it is to buy your tickets ahead of time, wear comfortable shoes and know that there is a “No Bags” policy, so if you bring a large bag you will have to store it.

Bringing history alive for your children and honoring those who lost their lives that fateful day is, in my opinion, one of the best reasons to visit Hawaii.

The National Park Service gives out 1,300 free walk-in tickets daily, on a first come, first served basis. It is highly recommended that you arrive at the Pearl Harbor Visitor Center early. Doors open at 7:00 AM Hawaii Standard Time.

We were the guests of Pearl Harbor for this tour.