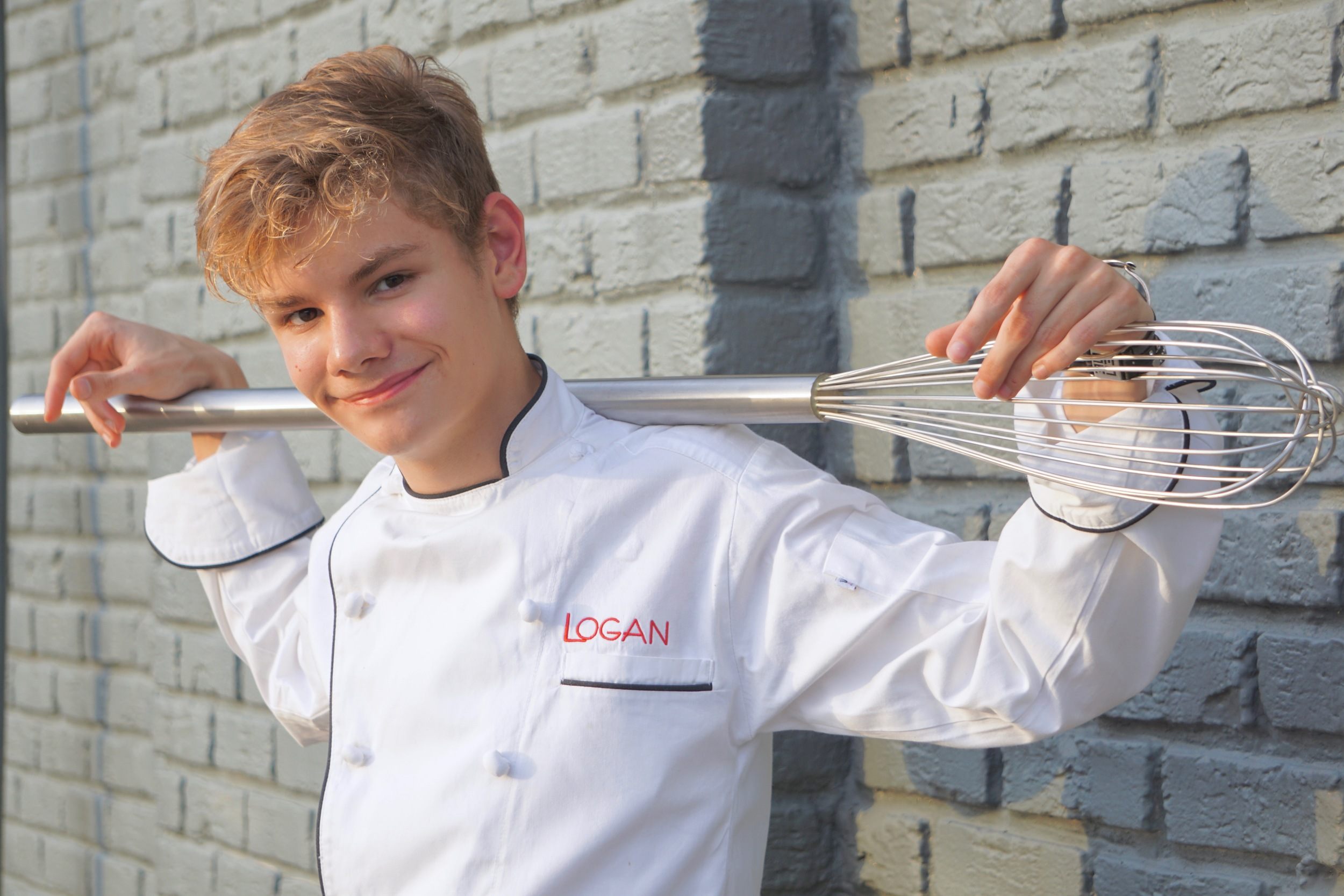 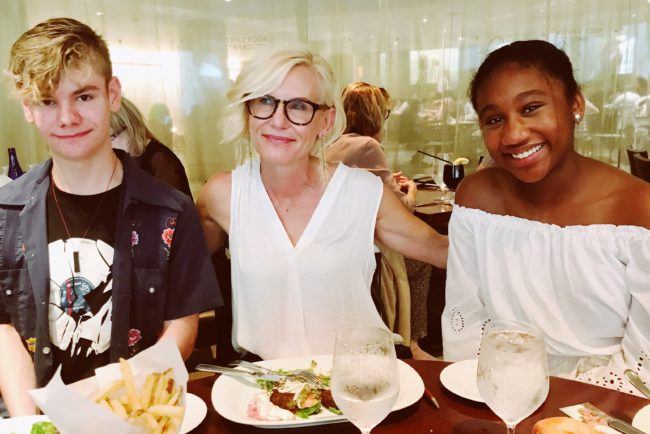 You know how I feel about kids’ menus, and about lousy food for kids in general. I recently wrote about Raising Kids with Great Table Manners and one of my strongest points is about not letting your kids live on chicken nuggets and pasta. When I was invited to meet a couple of amazing young chefs working on the Great Wolf Lodge Junior Chef Council, I was intrigued.

Great Wolf Lodge and innovative cuisine have never been a natural pair in my mind, but that might be changing. They announced today that they are launching a new program called the Junior Chef Council. MasterChef Junior winners Jasmine Stewart and Logan Guleff will be heading it. Yesterday they sat down for a meal and a chat with me. These kids will be partnering with the executive chef at GWL to create their own takes on good food, for kids, by kids. Impressively, all of the marketing executives at the table let the kids do all the talking, and it appears that the kids will also have a huge amount of creative freedom in this endeavor.

Who is the Junior Chef Council?

A bunch of kids I have never heard of. I don’t watch reality TV, or cooking shows. But my kids were impressed I “know” Jasmine and Logan. Why do all kids love cooking shows now? Is it because my generation of moms are not super keen on cooking? Jasmine is a 13 year old #girlboss chef. At lunch I asked her how her parents encouraged her love of food. They started teaching her to cook at 3 because she would not leave them alone about it. Her dad is from Jamaica and her mother from Virginia, from the sounds of it, meals at her house are seriously tasty. She wanted to learn to cook like her parents, so they let her. When I asked how she learned all of the ways that various foods and tastes go together, the science of cooking (I know it exists, it’s just not a knowledge base I possess – for food – cocktails are another story) I learned that she is a devotee of Food Network and a huge fan of Gordon Ramsey. She also follows chefs on Instagram and pays attention to their techniques. It’s fascinating to me how many kids are learning to cook from online content, or at the very least being inspired to try cooking. 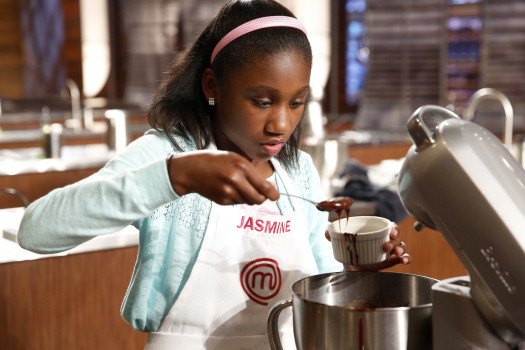 Logan Guleff is the coolest 16 year old you will ever have a meal with. He describes his style as self trained and not by the book. He swears he can’t even follow recipes, but he has an understanding of food and what makes a dish sing that is lost on most adults. He handed me his CV at the end of the meal without ever mentioning that he had been invited to the White House to meet President Obama.Matthew McConaughey could take suave lessons from this kid.

Like Jasmine, his parents let him experiment with food at a young age. In order to encourage his writing his mother would promise that he was allowed to try one new restaurant for every two blog posts he produced. So produce he did. She also let him try crazy things in the kitchen. He told me that he had a great idea once to cook an egg in lemon soda (like 7-Up). I asked if this was like poaching, he managed to conceal what I can only imagine is his disappointment in my lack of basic cooking skills, good kid. The yoke was not tasty he said, but the egg white created some frothy little dream that he is keeping in the back of his head for a dish. He tried pan searing marshmallows and any other number of abominations in his kitchen. He ended up competing on the television show MasterChef Junior because he told his dad he didn’t want to even watch it, because he knew he could win it. The next day his father brought home a stack of applications and told him to “put up or shut up.”

Logan is from Memphis and loves a good food truck and BBQ. When I asked for recommendation he gave me a list that made me feel like a foodie insider. He is 16. We will never be as cool as this kid. Memphis recommendations at end of article. 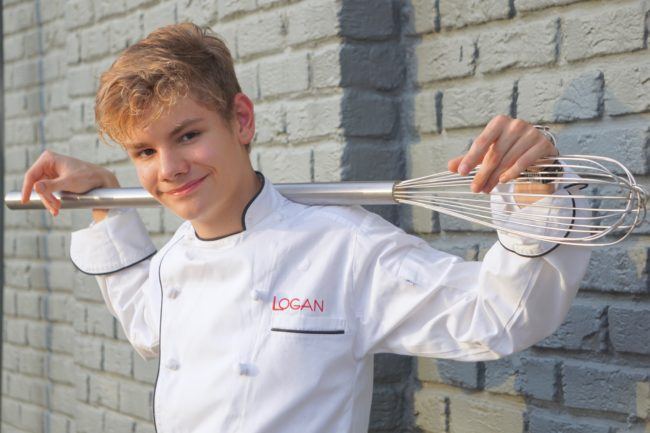 Jonas Cora Ehrlich (12) and Gavin Cora Ehrlich (10), sons of Iron Chef Cat Cora and wife, Nicole Cora Ehrlich; Madeline Zakarian (11) and Anna Zakarian (9), daughters of Iron Chef Geoffrey Zakarian; and Conrad Elliot (8) and Jed Elliot (6), sons of Chef Graham Elliot.  While Conrad is an official member of the Council, Jed will serve as the Council’s official taster, he wanted to be on the council, but he’s only 6, and there are knives involved.

The council is headed to the Great Wolf Lodge property in Georgia next month to start creating a brand new menu, for kids/by kids. It will eventually be rolled out over all 17 properties. According to Great Wolf Lodge representatives, “The six-person Junior Chef Council brings a diverse culinary background to Great Wolf, and will work together on developing a completely new kids menu.  The talent level is equally impressive. Logan and Jasmine each won a rigorous TV cooking competition, while the other members of the Junior Chef Council bring a different degree of culinary experience to the group, being children of some of the world’s most talented chefs. ”

Both Jasmine and Logan have traveled extensively and credit visiting other countries and cultures as part of what has inspired their passion for food. I loved hearing about parents who pushed their kids to try new things, places, foods, and experiences. Even more I loved hearing about their collaborations with mom and dad in the kitchen. Dinner in our house has usually been a miserable affair of me whipping something up at the last minute while the kids do homework and complain, there’s not a lot of joy or creativity. After chatting with these two, I’m inspired to try something fun and different with my kids, I’ll let you know how it goes.

Luxury Travel Mom is not affiliated with or compensated by Great Wolf Lodge, this is a straight editorial piece.