The Chanler at Cliff Walk Review 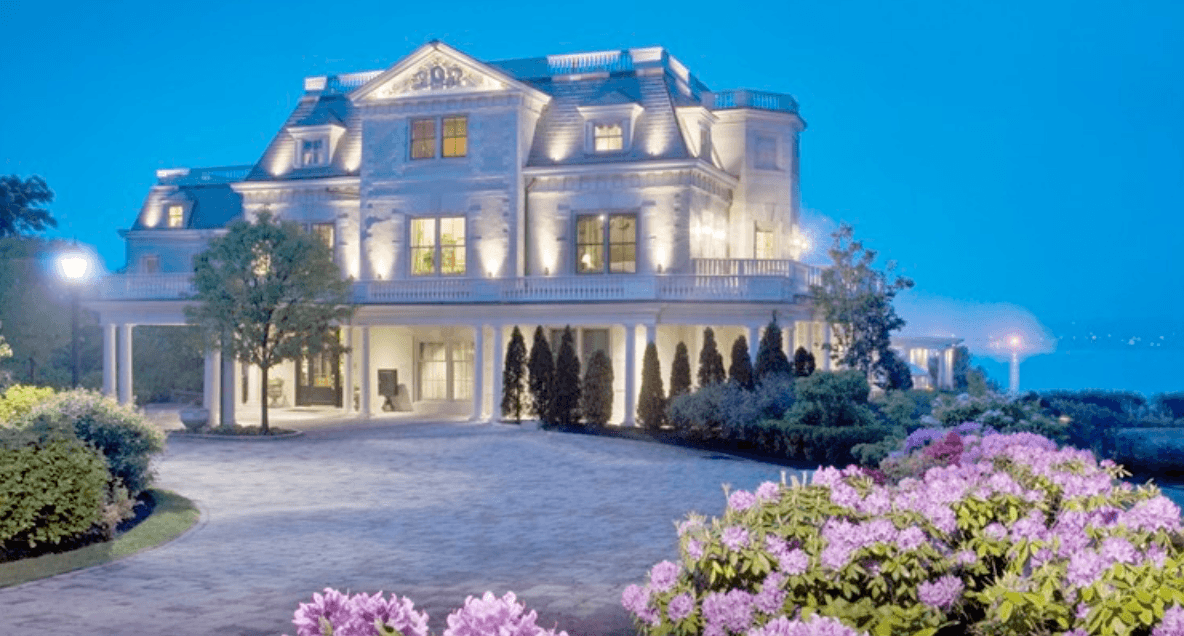 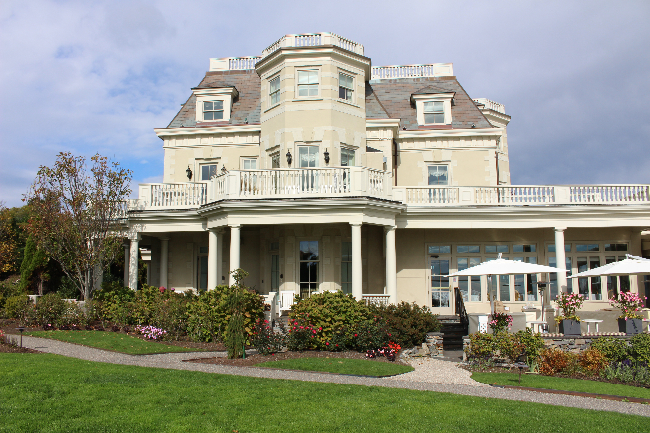 You may not have had the good fortune to be married to a railroad tycoon and live on Mansion Row in Newport during the Gilded Age, but when you stay at The Chanler at Cliff Walk you can pretend for a weekend.

This turn of the century mansion was the first home built on the famed Cliff Walk and is now a luxury hotel with only 20 rooms and villas. In fact it’s the only hotel along this storied corridor. When these grand homes were constructed the well heeled started a tradition of referring to mansions as “cottages” that continues to this day. Famous visitors included President Teddy Roosevelt, at the time the property was known as the Cliff Lawn. You can see why. There are adirondack chairs dotted across the rolling grass where guests enjoy a morning cup of coffee or an evening cocktail. Or if you’re visiting for a scotch and cigars event….well then. 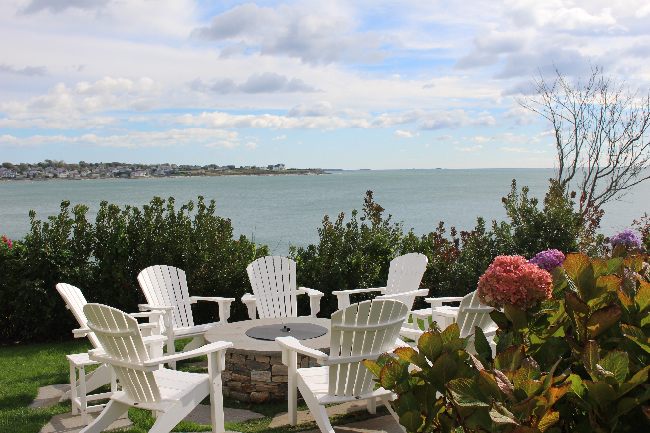 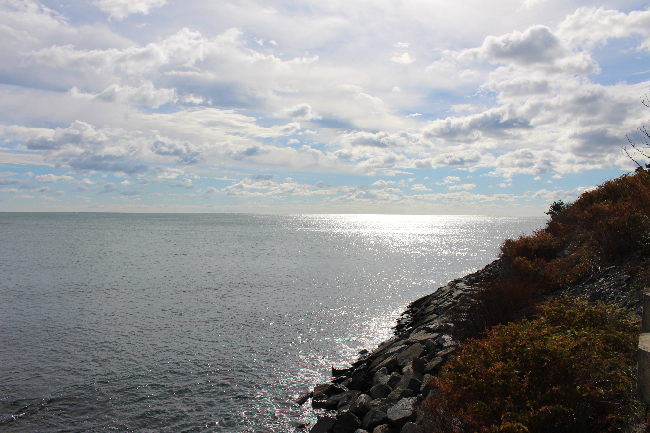 I was invited to review The Chanler along with one of their signature events, a scotch and cigars dinner. Needless to say I did not bring children. This would be a fine hotel for one night with kids, but it is a very sophisticated grown up vibe that even the Luxury Travel kids would probably ruin. However, for a night or weekend away from said children? Sheer brilliance.

What You Need to Know

Coming from the northeast most people choose to drive. I however think travel train is the biggest luxury ever. Three hours all alone with wi-fi? Practically a vacation in itself.

The nearest airport is T.F. Green in Warwick, it’s about 35 minutes from the hotel and service by most domestic airlines. The hotel offers amazing shuttle service from the airport or the train station. This same service is available during your stay for trips in to Newport or to the mansions, parking is tight and their car service is especially useful if you plan to do any cocktail tasting. 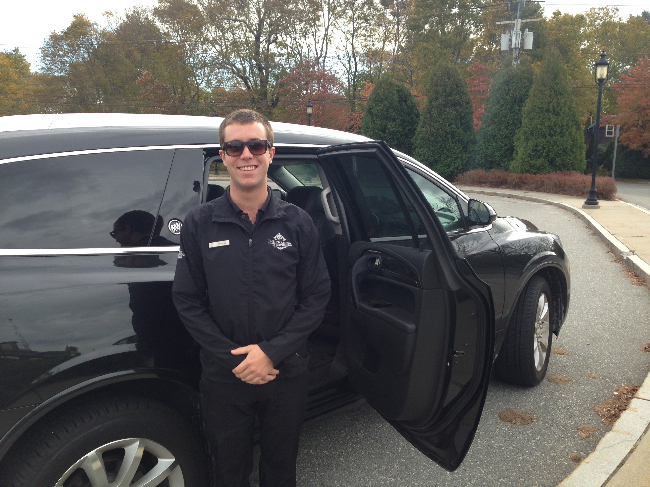 Which room to choose?

Each room has its own distinctive style, the French room is straight out of a Marie Antoinette fantasy. I stayed in the Empire Suite, it had a separate sitting area complete with soaking tub next to the writing desk. A journalist fantasy come true. My huge bed had a gas fireplace at the foot of it and a view out to the ocean. In my opinion you can’t go wrong with any of the rooms, except for the Victorian room and the Gothic Room, those two are  just weird. 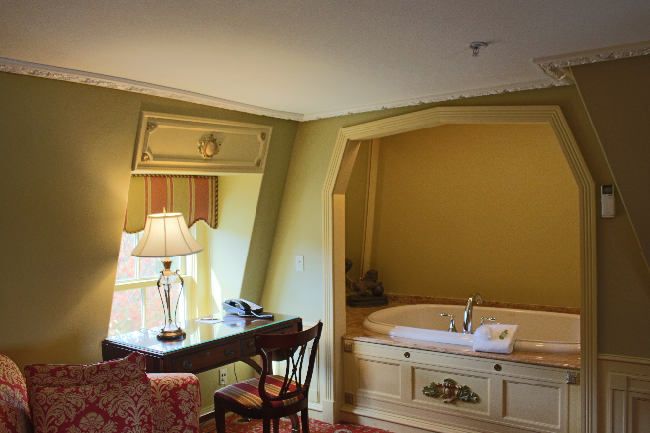 Seriously-a writing desk with view next to soaking tub 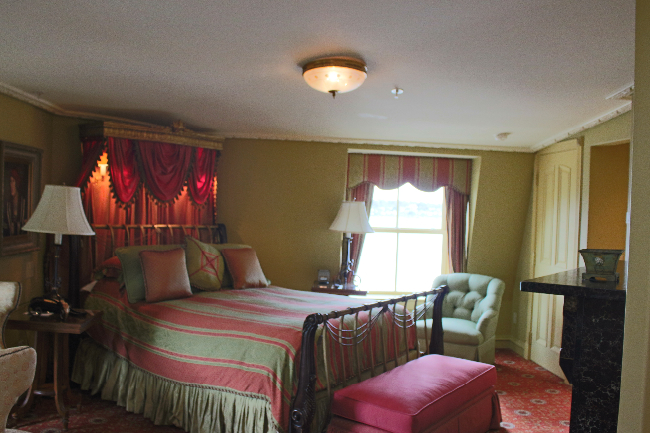 The Spiced Pear on property is a Forbes four star restaurant with stunning views. Breakfast, lunch and dinner are all fabulous here. The kitchen features a Bonnet cooking suite, the super fancy cooking set up featured in the movie “Chef”.  You can watch Chef Tom Duffy at work, you can even do a chef’s table event. The menu is first rate, grass fed beef, poached lobster, am I making you hungry? 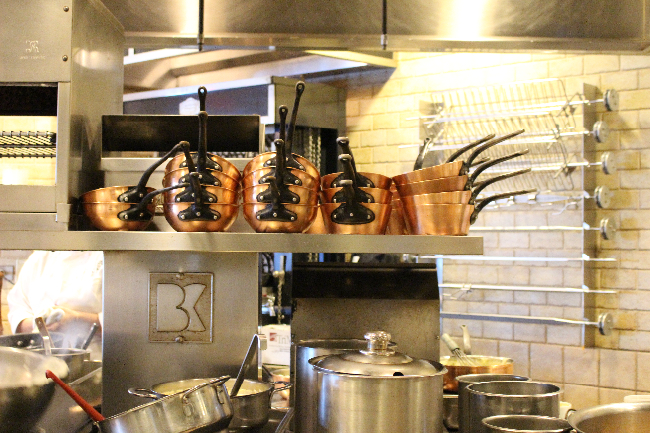 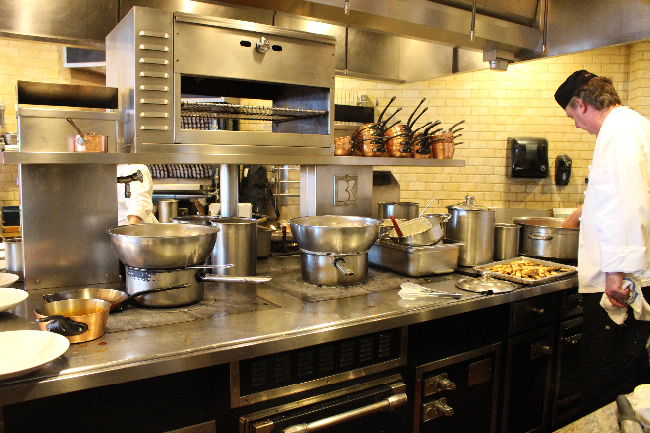 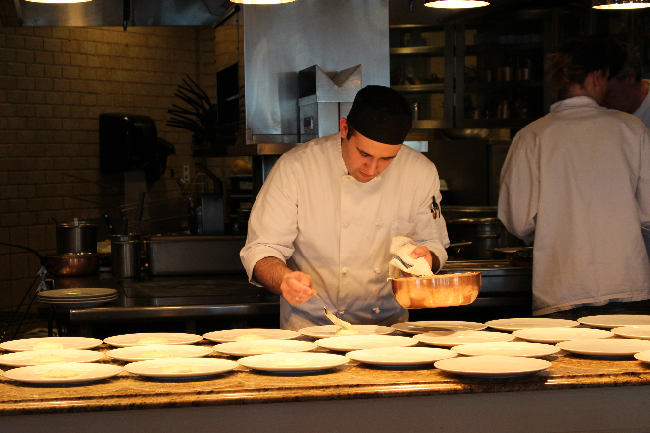 In addition to their wildly popular tasting menu, The Chanler hosts “Tasting Series” throughout the year. These are open to the public and I would say at least 3/4 of the crowd at the event I attended were not guests of the hotel. The next event is “Bubbles” – foods paired with Moet and Chandon on December 7. What could be better than that?

The Scotch and Cigars event I attended was more than just smoking and drinking. I could now compete on Jeopardy and take “Scotch for $400”. Who knew there were so many types of scotch? Also, they are distilled in old wine casks. Seriously, I now know more about Scotch than any other mom in the carpool line. I even found a few that I could tolerate. They still taste like putting your mouth around the unleaded hose at the gas station, but I found I actually enjoyed the 12 year old Glenkinchie from the lowlands. It was lighter than the others and paired nicely with the amazing menu chef Duffy created. 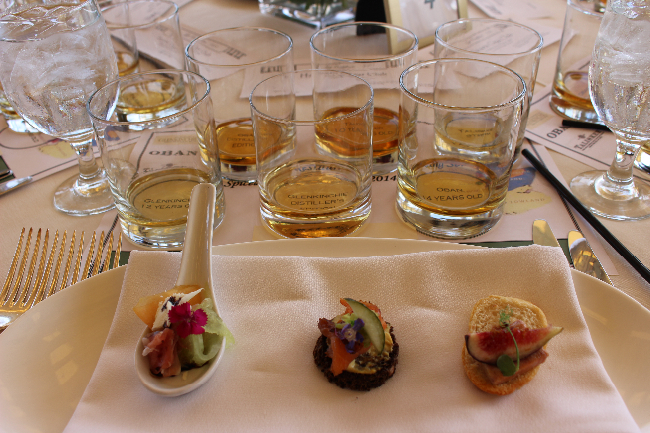 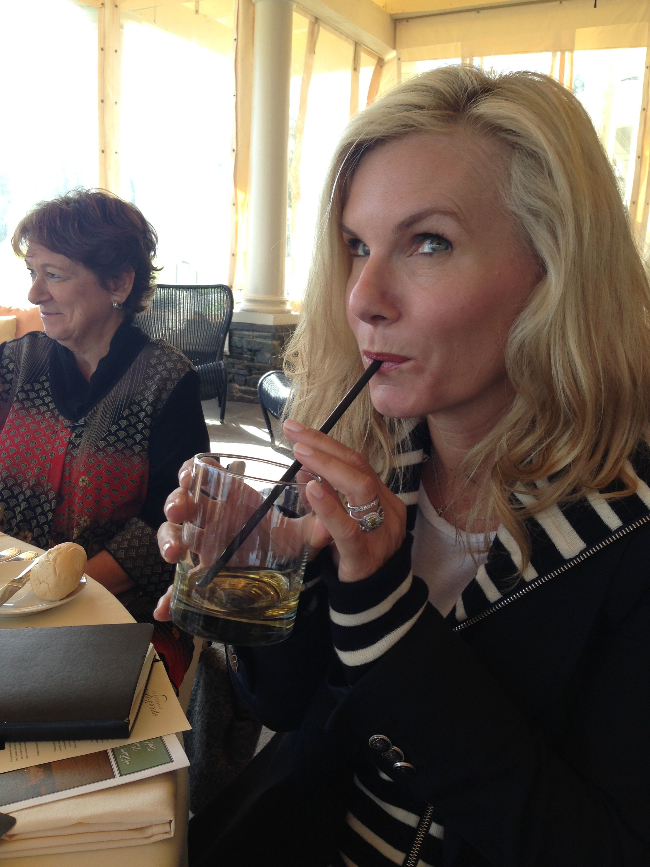 Apparently the straw is for adding water-um,not drinking

The event finished up with a cigar experience right out of Mad Men. I learned the proper way to light a cigar (I had been doing it all wrong) and the importance of not inhaling. Needless to say I have no idea if this property has a gym, but the Adirondack chairs around the outdoor fireplace are the perfect place to kick back with a stogey. 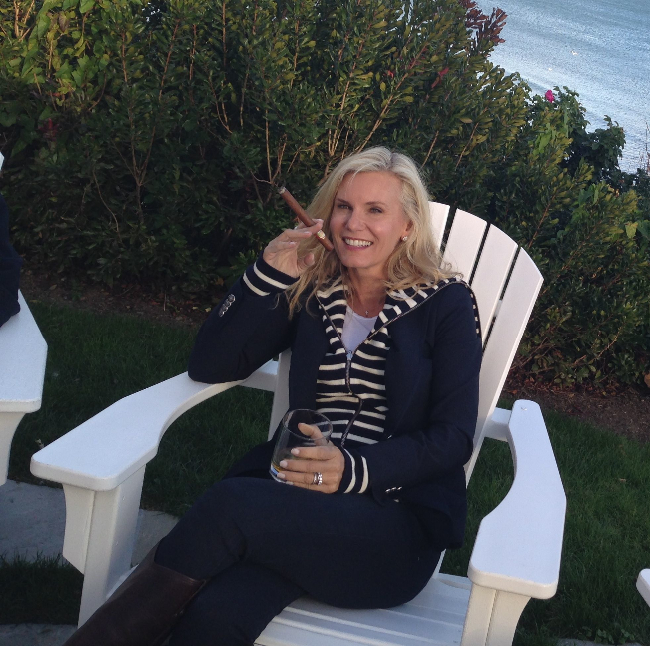 To See and Do in Newport

Newport really comes alive in the summer, but it is a draw year round. The largest tourist attraction is of course Millionaires Row where captains of industry built monolithic mansions prior to the introduction of the income tax. The last time I was in Newport we had small children with us and I know we tried to tour one of the houses, I don’t remember which one-I just remember being a sweaty nervous wreck chasing a toddler hellbent on destruction. Another reason children are best left behind on this getaway. 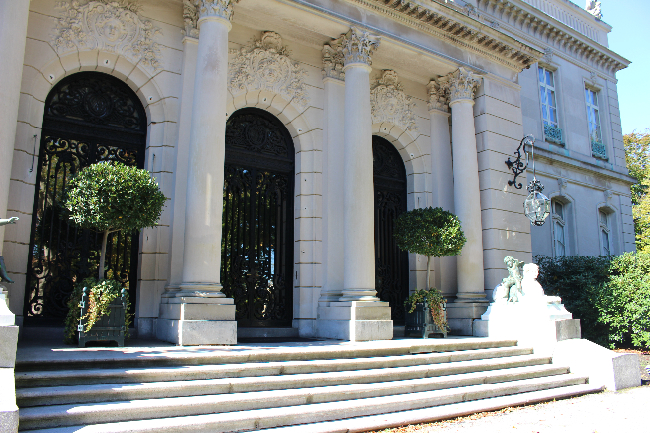 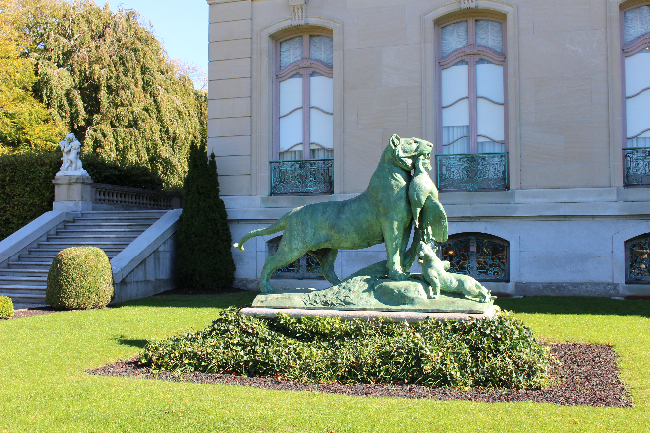 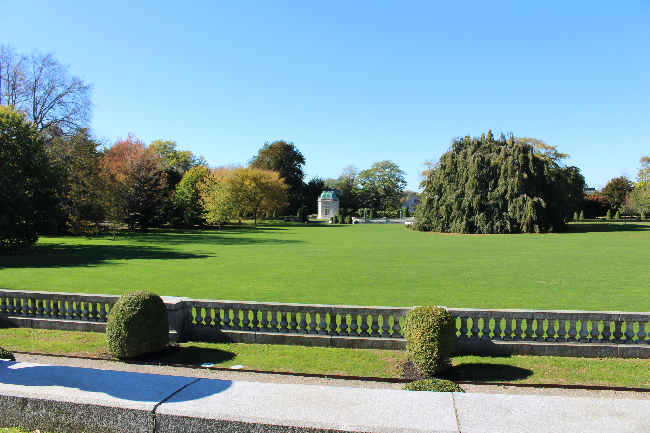 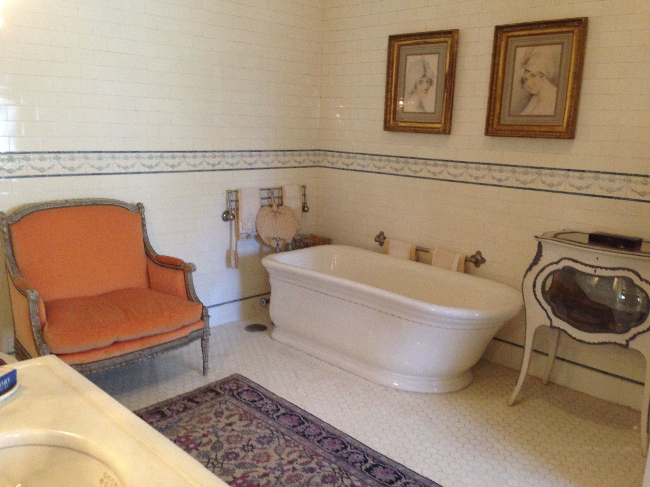 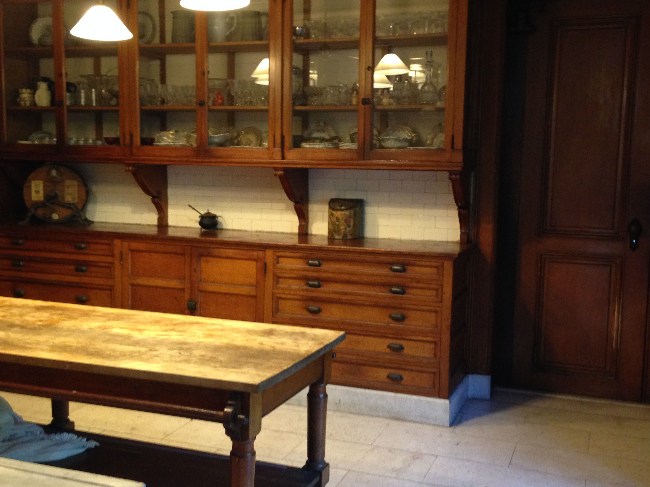 On this trip we toured The Elms, built at the turn of the century for a coal magnate this “house” is right out of a Downton Abbey fantasy. Be a dork and use the audio guide, otherwise it’s completely uninteresting. You aren’t supposed to take photos, but I’m pretty sure it’s only the flash that causes problems and I snuck a few flashlesss iPhone pics before I got caught. The Elms is one of the few “cottages” without a water view, but it’s my favorite. It was designed after a french chateau and still has a lot of the original furniture. The hotel bell staff can drop you off and pick you up from your mansion tour. The ride is complimentary, but don’t forget to tip.

Last but not least, my favorite part of any hotel stay, reviewing the signature cocktail. The bar at The Chanler is super cozy. I spent an afternoon working on the leather couch in the bar. Their signature drink is the S’Maurice, a s’more as imagined as cocktail. I am attempting to make it at home and will share results and recipe in a separate post. 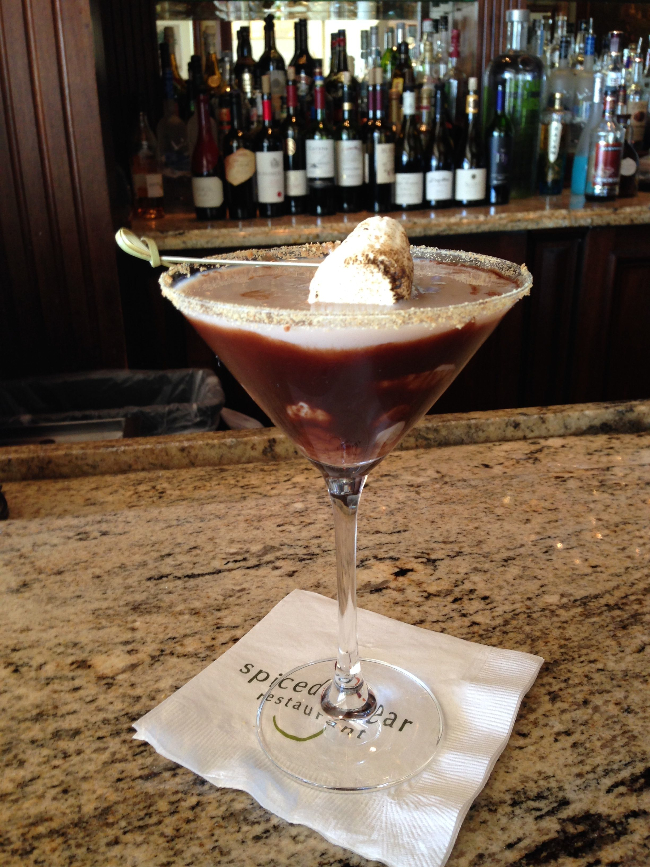 Most rooms run around $350-450 per  night. The suites with terraces are $550 and up. I was the guest of The Chanler for review purposes. No cigars were harmed in the creation of this post. I loved it so much, I plan to return with Mr. LTM.